A ‘Chipko-like’ movement to protest felling of trees

The movement, started by Prerna Prasad, spread rapidly in two days by word of mouth and social media. 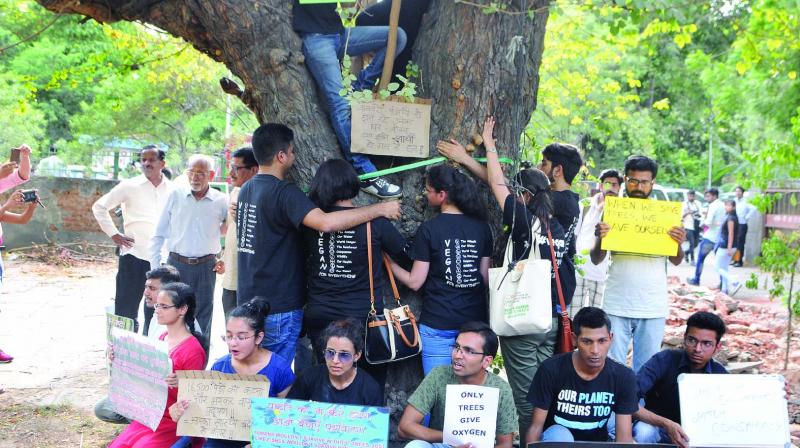 People hug a tree during a protest against cutting of trees at Sarojini Nagar in New Delhi on Sunday. (Photo: Biplab Banerjee)

New Delhi: In New Delhi’s own 'Chipko movement', scores of people gathered in south Delhi on the scorching Sunday afternoon, hugged trees and raised slogans to protest the felling of 16,500 trees for redevlopment of the area.

People from different walks of life, environment activists and NGOs rallied at a site in Sarojini Nagar and hugged trees, urging the government to stop the redevlopement project and not chop off the massive number of trees.

For middle-aged Virender Khanna, a resident of Kalkaji, who was present at the protest with his wife and daughter, the protest was an opportunity to raise their voice and urge the government to look for other options.

"Despite the fact that Delhi is one of the greenest capitals, there is the problem of pollution and lack of oxygen after every few months. Cutting trees is not a solution. The government should have contacted all stakeholders before taking such a decision,” he said.

Similarly, 49-year-old Sapna, an educationist, said she was disturbed after she got to know about the project. "I was so troubled by what is happening, it has made me come here. We are having holidays in schools because of polluted air. We have to stop somewhere," she said.

The movement, started by Prerna Prasad, spread rapidly in two days by word of mouth and social media and many organisations came together on Sunday near Sarojini Nagar police station.

"The government could shift some of the trees, translocate them in a scientifc way without cutting them. The authorities just take the decision to chop trees randomly. How is environmental clearance justified when so many trees are cut," said a landscape artist.