Many people from Delhi, Gurgaon, Noida and Ghaziabad took to Twitter just after they felt the earthquake tremors. 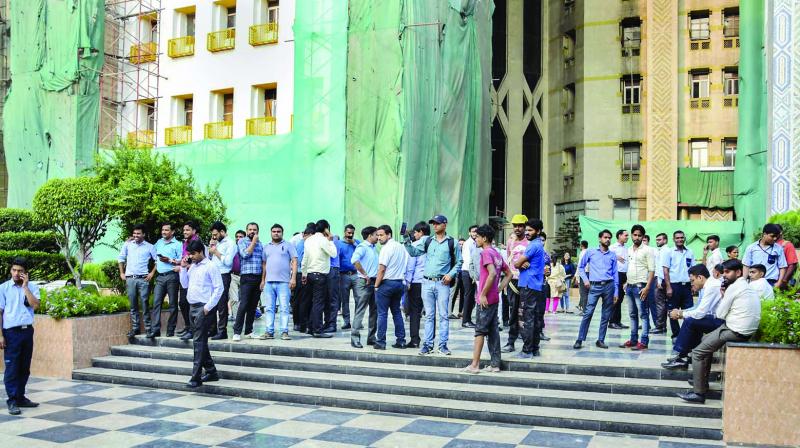 People come out of an office building at Connaught Place during a tremor in New Delhi on Tuesday. (Photo: PTI)

New Delhi: Earthquake tremors were felt across Delhi, the national capital region, Punjab and Haryana after an earthquake measuring 6.3 on the Richter scale hit Pakistan-India (Jammu and Kashmir) border region on Tuesday, the Indian meteorological department said. “No immediate casualties or damages were reported in city,” they added.

“The epicentre of the earthquake was Pakistan-India border, Jammu & Kashmir region. The magnitude of the quake was 6.3 on the Richter scale. Even we felt the tremors here in the office. Tremors were felt across Delhi, Punjab, Haryana and Jammu and Kashmir,” said J.L. Gautam, director operation, National Centre for Seismology.

“I don’t think that the quake has caused any damage in Delhi but there are several villages with poor constructions, which might get damaged,” he said.

“We can’t predict the aftershocks right now,” he added.

Many people from Delhi, Gurgaon, Noida and Ghaziabad took to Twitter just after they felt the earthquake tremors.

There was no immediate report of loss of life or property in India. Panic-stricken people rushed out of their homes and offices at some places in the region.