The Central Pollution Control Board (CPCB) recorded the overall Air Quality Index (AQI) of Delhi at 328 at 4 pm. 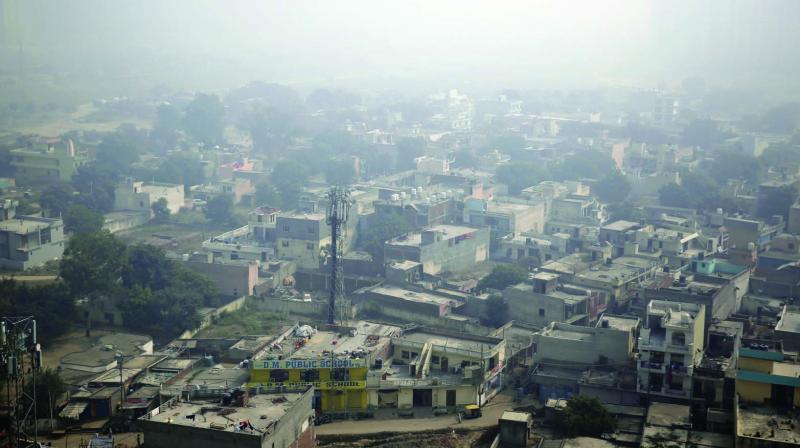 Morning haze envelops the skyline on the outskirts of New Delhi on Wednesday. The Indian capital and large parts of north India gasp for breath for most of the year due to air pollution caused by dust, burning of crops, emissions from factories and the burning of coal and piles of garbage. (Photo: AP)

NEW DELHI: Two days after staying in the “poor” category, Delhi’s air quality on Wednesday once again slipped to “very poor” on Wednesday, even as firefighting operations continued at the Bhalswa landfill site.

The Central Pollution Control Board (CPCB) recorded the overall Air Quality Index (AQI) of Delhi at 328 at 4 pm.

The air quality in the capital had shown signs of improvement Monday as it moved from “very poor” to “poor” category, but experts said it could deteriorate in the coming days due to toxic air coming out of the blazing fire at Bhalaswa landfill site.

A Delhi Fire Service official said firefighting was still on at the garbage dump site.

“Due to continuous discharge of methane gas from the landfill, fire erupts randomly. Two fire tenders are currently working on containing the fire at the site,” he said.

Fire has been raging at the massive dump site since October 20.

However, by Tuesday evening, the flames were somewhat brought under control and parts of the landfill smouldered, DFS officials had said.

The System of Air Quality Forecasting and Research (SAFAR) also reported an AQI in the 'very poor' category. The levels of PM10 and PM2.5 were recorded in 337 and 169 microgramme per cubic metre (ug/m3) respectively, much above their prescribed standard of 100 and 60 ug/m3 respectively.

On Saturday, a haze had engulfed the city and the worst air quality of this season was recorded at 324. North Delhi Mayor Adesh Gupta and NDMC Commissioner Madhup Vyas had visited the landfill site on Tuesday and the civic body had announced a slew of measures, both long-term and short-term for remediation of the site.