The Metro said that apart from the fare hike, festivities such as Diwali and Chhath could also be behind the drop in its ridership in October. 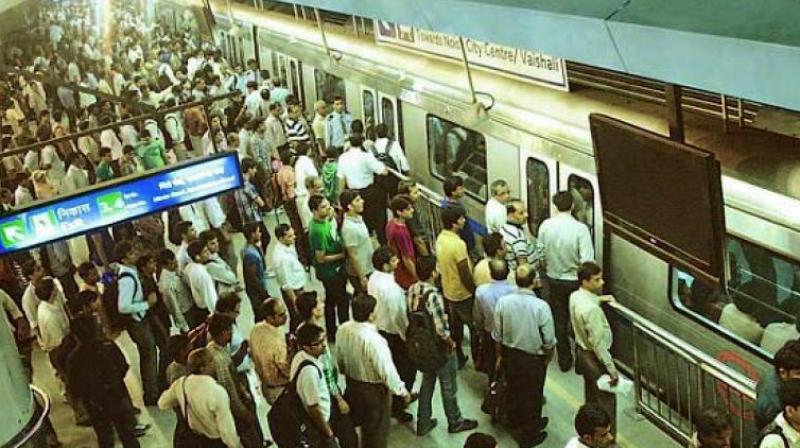 Ridership has come down several notches from the numbers observed in recent years, bucking a trend of rise on the back of the launch of newer sections. (Photo: File)

Delhi Metro lost over three lakh commuters a day after a steep fare hike came into effect on October 10, an RTI query has revealed.

The Metro’s daily average ridership came down to 24.2 lakh in October from 27.4 lakh in September, translating to a fall of around 11 per cent.

The Blue Line, considered the Metro’s busiest, lost over 30 lakh commuters, according to data shared by the Delhi Metro Rail Corporation (DMRC) in response to an RTI query by a PTI correspondent.

The 50-km corridor connects Dwarka to Noida. The Metro currently has a 218-km network across Delhi-NCR.

The fall, in terms of absolute numbers, was over 19 lakh on the Yellow Line, another busy corridor which connects Gurgaon to north Delhi's Samaypur Badli, DMRC said.

Ridership on the Violet Line, which connects ITO to Faridabad, plunged by 11.9 lakh in October. The number of riders on the Red Line, from Dilshad Garden to Rithala, came down by 7.5 lakh.

Ridership has come down several notches from the numbers observed in recent years, bucking a trend of rise on the back of the launch of newer sections.

In fact, in October 2016, the Metro's daily average ridership was 27.2 lakh, despite a comparatively shorter operational route. 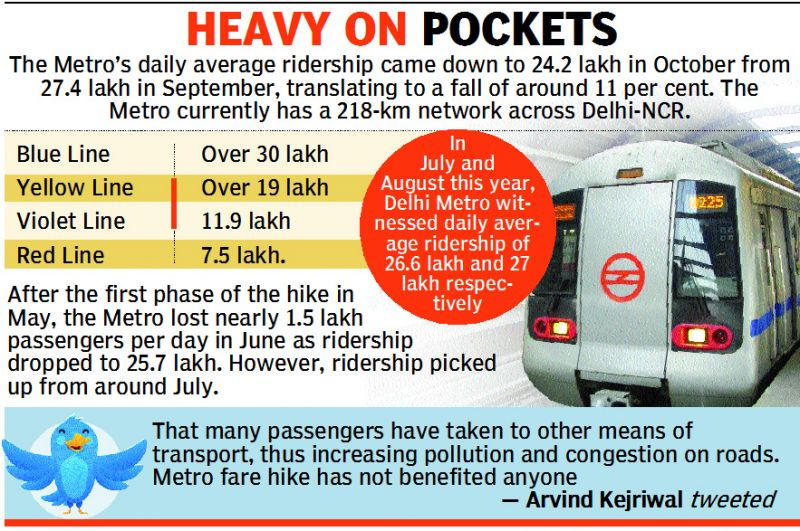 DMRC effected the fare hike on October 10, leading to a rise of around Rs 10 for nearly every distance slab. This came barely five months of another hike of up to 100 per cent.

Till May, the Metro transported around 28 lakh passengers daily.

After the first phase of the hike in May, the Metro lost nearly 1.5 lakh passengers per day in June as ridership dropped to 25.7 lakh. However, ridership picked up from around July.

DMRC — which had maintained the fare hike was essential to maintain financial as well as operational health — said in a statement that the drop in ridership is not solely because of increase in fares.

Reacting to the report, it said the month of October had holidays owing to festivals such as Diwali, Chhath Pooja and Bhai Duj.

“In the month of October there were 5 Sundays in comparison to 4 in September and ridership remains less on holidays than on weekdays. This monthly variation in ridership is dependent on multiple factors like seasons, vacations, holidays, festivals etc,” it said.

The Arvind Kejriwal-led AAP government had mounted stiff opposition to the hike, leading to a confrontation with the Centre.

“That many passengers have taken to other means of transport, thus increasing pollution and congestion on roads. Metro fare hike has not benefited anyone,” Mr Kejriwal tweeted on Friday.

The Metro said that apart from the fare hike, festivities such as Diwali and Chhath could also be behind the drop in its ridership in October.

The Metro also sought to put across the message that it would not review its decision of fare hike and stressed that it had been done on the recommendations of a fare fixation committee, “a statutory body under the Delhi Metro Act”.