Over 48 lakh unorganised sector workforce in Delhi is hit by faulty implementation of demonetisation resulting in reverse migration. 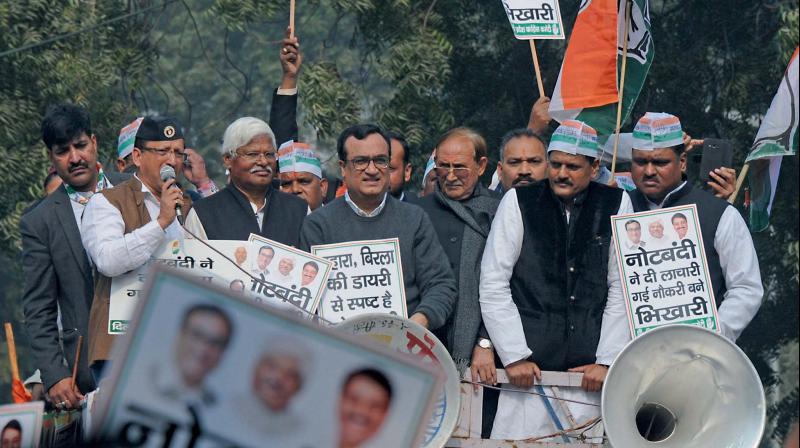 New Delhi: The Delhi Congress leaders and workers staged a protest march at Jantar Mantar against the alleged “reverse-migration” of workers belonging to the unorganised sector who are hit by demonetisation. They also sought Prime Minister Narendra Modi’s reply on the allegations of party leader Rahul Gandhi.

The “Palayan Roko Evam Javab Do” march from Jantar Mantar to Parliament House was led by Delhi Congress president Ajay Maken. The marchers were stopped by the police near Parliament Street police station.

Addressing the protesters, Mr Maken alleged that the “faulty implementation” of demonetisation has rendered lakhs of migrant labourers unemployed who have started returning to their home states.

“Over 48 lakh unorganised sector workforce in Delhi is hit by faulty implementation of demonetisation resulting in reverse migration. Lakhs of labourers have already returned to their homes, and 10,000 to 15,000 labourers are returning home every day,” Mr Maken claimed. In a direct attack on Prime Minister Narendra Modi, Mr Maken also demanded that he reply to allegations of corruption against him levelled by the Congress vice-president. “When Narendra Modi speaks about cashless economy, he should also reply to the question raised by Congress vice-president Rahul Gandhi,” Mr Maken said. The march organised by Poorvanchal, Parvatiya and South Indian wings of Delhi Congress saw participation by scores of workers in their traditional dresses who raised slogans against PM Modi and demonetisation.