The students were also joined by several people, including local residents and youths. 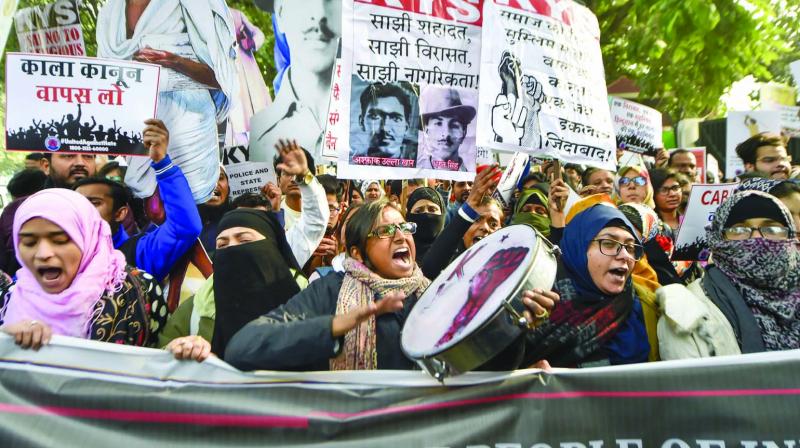 Activists and students of various universities on a protest march in New Delhi on Tuesday. (PTI, ASIAN AGE)

New Delhi: Amid slogans of halla bol and chhatra ekta zindabad, which resonated through the air, scores of students from various universities including Jawaharlal Nehru University (JNU), Jamia Millia Islamia (JMI), and Delhi University took out a protest march from Mandi House to Jantar Mantar on Tuesday against the contentious Citizenship Act. The students were also joined by several people, including local residents and youths.

On Tuesday noon, several students chanting slogans of “halla bol” and “chhatra ekta zindabad” commenced their march from Mandi House to Jantar Mantar. Earlier on Tuesday morning, scores of students from JMI took out a protest march from JMI to Mandi House.

The anti-CAA and NRC protests have seen participation from people of all age groups, especially students, in huge numbers.

At Mandi House, the police had already imposed Section 144 of the Code of Criminal Procedure (CrPC) to maintain law and order situation in the city and the students were stopped there. However, the police allowed protesters to march forward towards Jantar Mantar.

Bhavreen Kandhari, 79, a renowned environmentalist from Delhi, was among the protestors who marched from Mandi House to Jantar Mantar along with hundreds of other protestoes. Marching from FICCI Auditorium in front of Mandi House Metro station, Ms Kandhari emphasised that social justice and environmental conservation go hand in hand.

“We’re into the third week of these protests and people of all religions, castes, and classes need to come together because unless there is social justice we can’t fight anything else.

“It is the need of the hour to not only raise awareness about climate change but to make policies that are aligned with the conservation and development of the environment. These protests provide environmentalists and activists a platform to educate people and propagate for the cause,” she said.

Kiran, a resident of Chittaranjan Park, who brought her three-year-old twin daughters to the march, accused the government of “destroying the diversity” of the country.

One of the protestors, who is a resident of Shaheen Bagh, said: “The ongoing protest near my home is the most unique one among all. People, irrespective of religion, caste, and age groups, are attending it 24x7 for the last four days. We have cordoned off the road to separate police personnel and public so that no one gets near the police vehicles.”

Another lady from the same area said, “Food was available which was provided to everyone, including the police personnel. Water for ablution (wuzu) and mats for praying were also available. However, no media house was covering this as there was no violence or ‘TRP.’ It is a role model protest for the whole movement and it needs to be spread.”