Heavy overcast conditions had plunged the city into near darkness during the afternoon hours prompting vehicles to ply with headlights on. 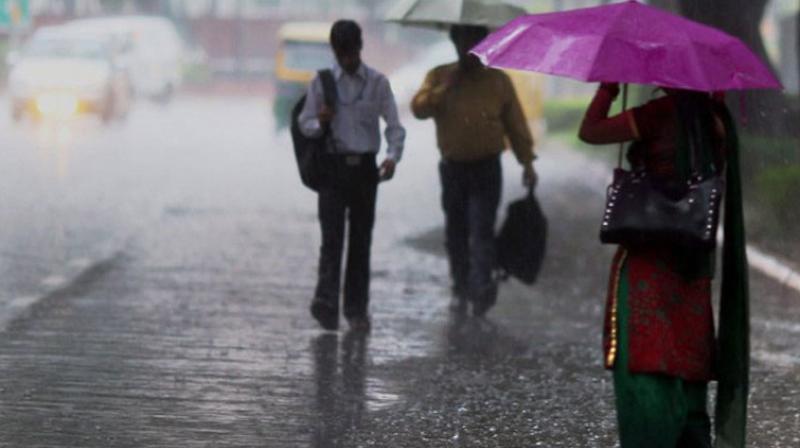 Heavy rains lashed the national capital on the Republic Day bringing down the maximum temperature to 18 degrees Celsius. (Photo: PTI/File)

New Delhi: Heavy rains lashed the national capital on the Republic Day bringing down the maximum temperature to 18 degrees Celsius, four notches below the season's average, while water-logging in several parts of the city slowed the vehicular movement.

Heavy overcast conditions had plunged the city into near darkness during the afternoon hours prompting vehicles to ply with headlights on.

The Safdarjung observatory, the recording of which is considered the official figure for the city, received 23.7 mm rainfall between 8.30 am and 5.30 pm, said a MeT department official.

"The rainfall is due to Western disturbances and the rains will continue throughout the night," said Dr M Mahapatra, Additional DG Services, IMD.

According to a senior Railway official, 25 north-bound trains are running late while 10 trains have been rescheduled and three have been cancelled due to bad weather.

Flight operations at Delhi airport was severely affected due to bad weather with most of the flights failing to depart or arrive on their scheduled time, according to Delhi Airport Website.

When contacted, the spokesman of Delhi International Airport Limited (DIAL), the company that operates the city airport, was not available for specific details.

The minimum temperature settled at 16 degrees Celsius, seven notches above the normal while the maximum temperature was at 18 degrees, four notches below the season's average, the weatherman said.

The humidity oscillated between 100 and 72 per cent.

The MeT office has forecast partly cloudy skies for tomorrow.

"The maximum and minimum temperatures are likely to hover at 17 and 14 degrees respectively," the weatherman said.

Yesterday, the maximum and minimum temperatures were recorded at 25.1 and 12.5 degrees Celsius respectively.