Kejriwal says there should be no ‘political interference’ in its functioning. 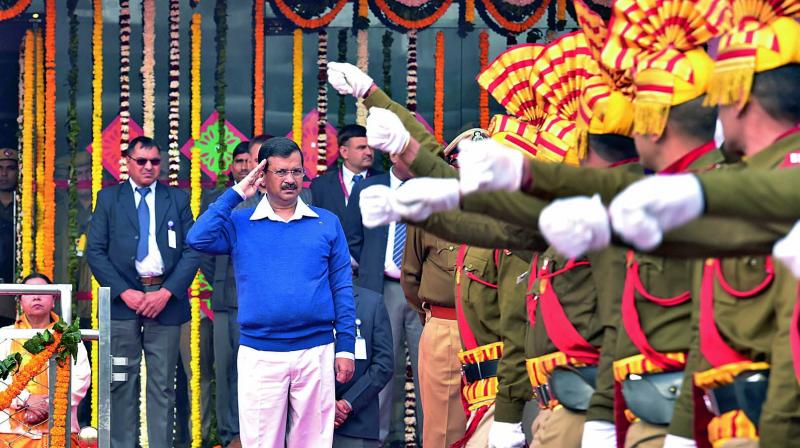 New Delhi: Days after 20 Aam Aadmi Party legislators were disqualified by the President on the Election Commission’s recommendation, Delhi chief minister Arvind Kejriwal on Thursday said that there should be no “political interference” in the functioning of constitutional institutions. Addressing a gathering at a Republic Day function at the Chattarsal Stadium in north Delhi, Mr Kejriwal said that political interference “destroys” every constitutional institution.

If constitutional institutions are allowed to work independently, they can work in a better way, Mr Kejriwal said. He said that no officer and no constitutional body was bad, instead, politics was bad.

Giving an example of the Delhi Commission for Women (DCW), Mr Kejriwal said the women’s panel along with the police had done a remarkable job on women’s issues, and this was possible because neither the Delhi government nor the Centre interfered in their functioning.

“Our officers are good. Our constitutional bodies are good. If there is something bad, it is politics. I hope that as we did not interfere in the (working of) DCW, police and allowed them to work independently, I hope that all constitutional bodies will be allowed to work independently and they can then do better work,” he said. The AAP has been opposing the Election Commission for disqualification of its 20 MLAs for allegedly holding offices-of-profit as parliamentary secretaries.

President Ram Nath Kovind had on Sunday approved the EC’s recommendations. The party has now challenged the poll panel’s decision in the Delhi High Court. Chief Election Commissioner O.P. Rawat was also targeted by the AAP on Monday with the party terming as “false” his claim that the 20 MLAs did not seek hearings on the issue.

Meanwhile, speaking on crime against women at the event, the chief minister said that every family should train boys and teach them about respecting women.

The chief minister reiterated that the Centre should either amend the “Master Plan” or bring an ordinance, if required, to stop the sealing drive being carried out by civic bodies since last month in the national capital.

Mr Kejriwal said that the Delhi government will provide all possible cooperation to the Centre in this regard.

“These days, traders have been facing a lot of problems due to sealing. I have seen a video in which a trader was pleading police not to seal his business establishment. “Traders work hard. If trades are closed, who will then provide employment in Delhi?” he said.

Mr Kejriwal also said, “Harassment of traders through sealing drives should be stopped.”

The AAP, the Congress and the BJP have been opposing the sealing drive in the city.