All parties will work for peace: Arvind Kejriwal

Kejriwal said the Army will be brought in if need comes, but for now the police was trying to handle the matter. 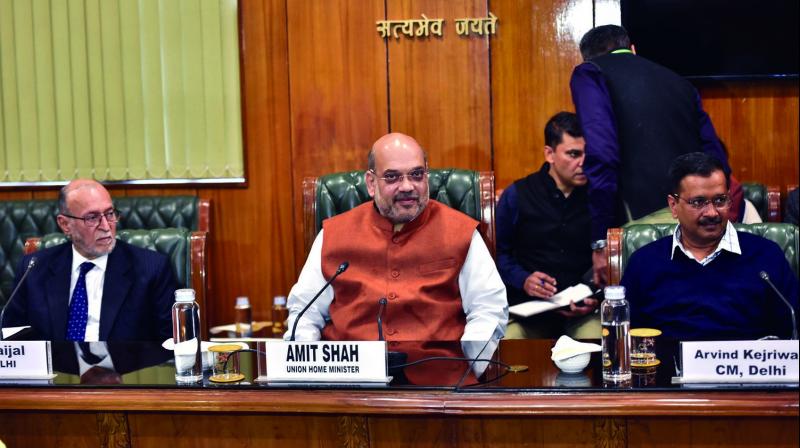 New Delhi: Delhi chief minister Arvind Kejriwal, on Tuesday, urged everyone to refrain from indulging in violence, saying all issues can be dealt with through dialogue. He also met Union home minister Amit Shah and called for sealing the city’s border in areas that saw violence over the amended citizenship law to prevent “outsiders” from entering the national capital and creating trouble. He said he has got reports that “the police could not do anything” to prevent trouble.

“I have asked the district magistrate to conduct peace meetings where people from all religions will participate. I have also asked MLAs to participate in them,” said Mr Kejriwal.

“The police constable who was killed and others who have been injured are all our people. They are the people of Delhi. This is not a good situation. Those whose homes and shops have been burnt down, they are part of someone’s family,” Mr Kejriwal said.

After meeting with Mr Shah, the Delhi chief minister said, “The police will be sent wherever they are needed, the Centre has told me.”

Mr Kejriwal, after his meeting with the home minister, said that the meeting was a positive one and that all political parties will attempt to restore peace in the city. He said the Army will be brought in if need comes, but for now the police was trying to handle the matter.

“The police personnel could not do anything because they were not getting orders from their seniors. I will raise this with (home minister) Amit Shah ji. They can’t decide whether there should be tear-gassing or lathi-charging without orders from above,” Mr Kejriwal told reporters before his meeting with Mr Shah.

“They told me that outsiders are coming and trying to make the situation worse. The border of Delhi needs to be sealed for some time,” Mr Kejriwal said.

The chief minister also asked all hospital authorities to give best possible treatment to victims and asked them to stay on vigil.

“The fire department has also been asked to coordinate with the police and reach the affected areas on time,” he said.

Mr Kejriwal, along with his deputy CM Manish Sisodia and other AAP leaders, also went to Rajghat and said, “The entire country is worried about the violence that took place in Delhi in the past two days. There has been loss of lives and properties. If violence increases, it will affect everyone. All of us here are to offer our prayers to Gandhi ji who was a follower of non-violence.”