Notably, the ownership of the Surajpur wetland is with the irrigation department. 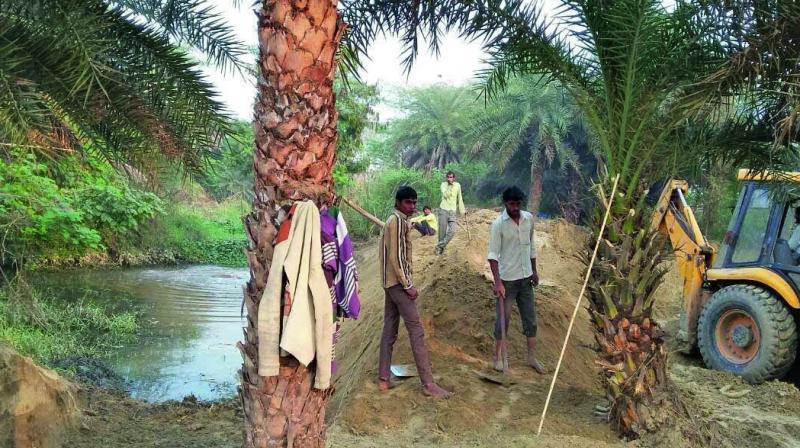 New Delhi: Illegal construction at Surajpur wetland to create an artificial drain, for which several trees were also cut down, has affected the natural habitat there.

The irrigation department has come down on the forest authorities for diverting the natural flow of Tilpata Lake in order to develop a new artificial drain path for “beautification and landscaping” purposes, which has also affected the water table.

The wetland is spread across 325 hectares, including a natural lake of 80 hectares. Located on the Dadri-Surajpur-Chhalera (DSC) road in Greater Noida, the wetland and the Surajpur Bird Sanctuary is a haven for migratory and local birds. Its rich biodiversity attracts scores of nature lovers from across Delhi-NCR.

The catchment area of the drain, the biggest water source for the wetland, has been affected by the construction activity. A team from the irrigation department visited the wetland on April 13 after a complaint was filed by environmentalist Vikrant Tongad. The team directed the forest department to restore the natural flow of the lake. Notably, the ownership of the Surajpur wetland is with the irrigation department.

“The natural drain path was stopped and filled with sand which has destroyed the rich vegetation and affected the wildlife which used to come near the wetland. The drain is the only source of water for the wetland. Instead, they have planned to develop a much smaller drain and are also trying to tile it. Any construction activity is against the Wetland Rules 2010, the NGT (National Green Tribunal) orders, and the Forest Act,” said Mr Tongad.

According to an official of the irrigation department, “The construction activity was illegal. They have reduced the breadth of the natural bed. We have given them directions to restore the natural drain as soon as they can.”

This comes two months after another such construction work was stopped at the wetland after the intervention of NGT.

In February, the district forest authorities had started work to develop an eco-park project but it was shelved after NGT objected that any human intervention would damage the wildlife or forest area.