Counting of votes began at 8 AM on Wednesday with the BJP gaining early leads in all the three municipal corporations. 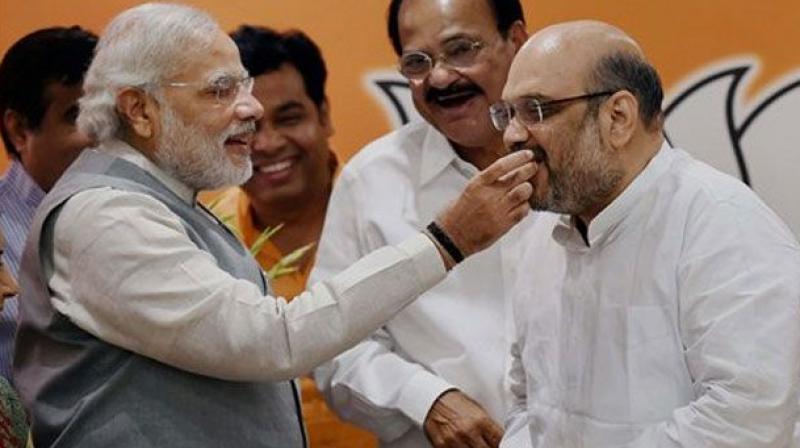 According to results, the BJP won 35 seats and the Aam Aadmi Party managed to get 15 seats in North MCD. (Photo: PTI)

New Delhi: The BJP swept to a landslide victory in all three municipalities of Delhi on Wednesday. According to the final tally, BJP has won 181 wards while the Aam Aadmi Party (AAP) finishes a distant second with 48 wards, Congress gets 30.

In MCD East, Congress put up its strongest performance, leading in 13 wards. But here too, the BJP left its rivals behind by leading in 70 of the 104 wards. The AAP managed leads in just 15.

Trends for all the wards have now come in.

Counting of votes began at 8 AM today with the BJP gaining early leads in all the three municipal corporations – NDMC, SDMC and EDMC.

Expressing gratitude for bestowing the Bharatiya Janata Party (BJP) with their mandate, Prime Minister Narendra Modi on Wednesday thanked the people of New Delhi for choosing the saffron party.

Taking to Twitter, the Prime Minister lauded the endeavours of the leaders of the saffron cadre in making the big win possible.

"Grateful to people of Delhi for faith in BJP. I laud hardwork of team BJP which made the resounding MCD win possible," Prime Minister Modi tweeted.

Earlier in the day, the AAP leaders including Deputy Chief Minister Manish Sisodia were huddled at Chief Minister Arvind Kejriwal's residence as the trends showed a poor show by the party.

The defeat of the AAP comes close on the heels of the bypolls for Rajouri Garden Assembly seat where BJP-Akali Dal candidate won while AAP candidate lost his security deposit.

On polling day, Delhi Chief Minister Arvind Kejriwal attacked the State Election Commission claiming that reports of "faulty" EVMs were pouring in from across the national capital.

The Aam Aadmi Party chief also alleged that many voters with valid voter slips were "not allowed" to exercise their franchise in the municipal polls. Arvind Kejriwal had earlier demanded that the election be postponed till arrangements for VVPAT-equipped EVM were made.

"EVM has proved that its unhackable. It is a robust machine. Don't think there should be any question related to EVM," State Election commissioner S K Shrivastava said.

Polling did not take place in two wards, Maujpur in east Delhi and Sarai Pipal Thala in north Delhi where a candidate each of the Samajwadi Party died.

Kejriwal's former party colleague Yogendra Yadav, who now leads the Swaraj India, wrote an open letter to the chief minister and challenged him to win at least 50 percent seats in the civic polls or step down.

AAP MLA Alka Lamba has offered to resign from her post and also relinquish all positions in the party taking "responsibility" for the defeat of AAP candidates in her constituency.

Delhi Congress chief Ajay Maken resigned from his post earlier in the day following the Congress' poor show in the MCD elections, where it finished third.