Her husband, who also came to Delhi along with Sheela, but the alleged traffickers held him captive at their office in Taimur Nagar. 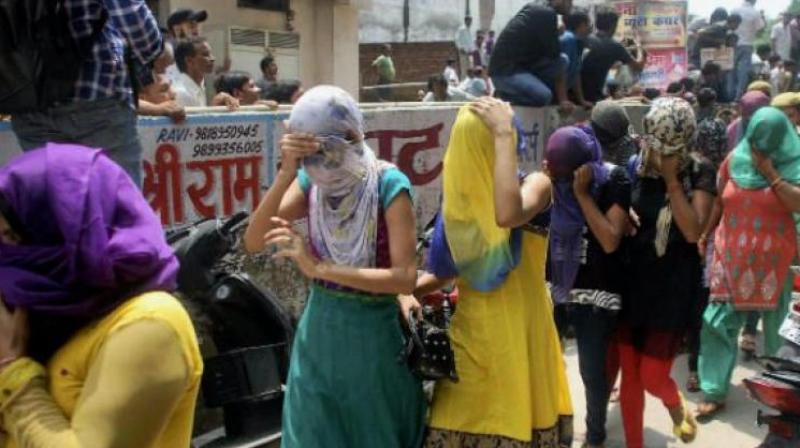 The police had announced a reward of Rs 50,000 for anyone searching for the girl, while the the Special Investigating Team (SIT) was constituted to trace her. (Representational Image)

New Delhi: The AATS,  Southeast, Delhi police succeeded in tracing a girl who was trafficked from Assam in 2012 by some touts. The girl, who is 22 years old now, was sold to agents as a 16-year-old in Delhi and worked as a domestic help in Ludhiana and the city.

The police had announced a reward of Rs 50,000 for anyone searching for the girl, while the the Special Investigating Team (SIT) was constituted to trace her.

According to the probe, the girl was allured by the touts on the pretext of spending her vacations in Delhi and later subjected to work as a domestic help.

On January 2014, one woman, Sheela (name changed), from Assam approached Bachpan Bachao Andolan, an NGO,  in Delhi and said that her 16-year-old daughter Pooja (name changed) has been kidnapped from her native place in Assam by one local manpower supply agent Deepak in 2012.

Sheela said she (Pooja) was further sold to one Jacob Deep, running a placement agency in the name of A.A. House Keeping and Office Staff providers at Taimur Nagar, Delhi.

Her husband, who also came to Delhi along with Sheela, but the alleged traffickers held him captive at their office in Taimur Nagar.

Soon in a joint effort by the police and the Bachpan Bachao Andolan , on the said information a joint team from New Friends Colony and the NGO was constituted and a raid was conducted at Taimur Nagar where the girl’s father, Mangal Munda, was held captive. On searching the premises, the police did not find the missing girl.

DCP, Southeast Chinmoy Biswal said, “During the course of investigation, accused Jacob Deep was arrested and Deepak was declared  a proclaimed offender (PO). The police made efforts to trace the victim, but without success.

"The case was then transferred to AATS, Southeast.The police team started from the very beginning and joined all possible links. Informers were deployed and the police team raided all possible hideouts in Ludhiana, Coimbatore, Assam and Delhi etc to get a clue about the missing girl.

Finally, Mr Biswal said, they got a clue that the girl was residing and working as a domestic help in Shalimar Bagh. The said information was further developed and raid was conducted at BQ Block, Shalimar Bagh and the police team recued the girl.

"The victim  said that she is 22 years old and working as free-lancer domestic maid out of her own will.

She told the police she resided in a jhuggi in Shalimar Bagh. In  2012, Deepak had lured her to go with him to Delhi for vacations and Deepak introduced her to Jacob Deep, who runs a placement agency.

From Delhi, she was taken to Ludhiana in Punjab and was sent as a domestic help. In Ludhiana, she worked for two years and Deepak took her salary and forced her to work. She changed jobs and finally settled in Shalimar Bagh," added Mr Biswal. Efforts are being made to arrest the absconding Deepak.