AAP will back any secular alliance to stop Modi-Shah from coming to power. 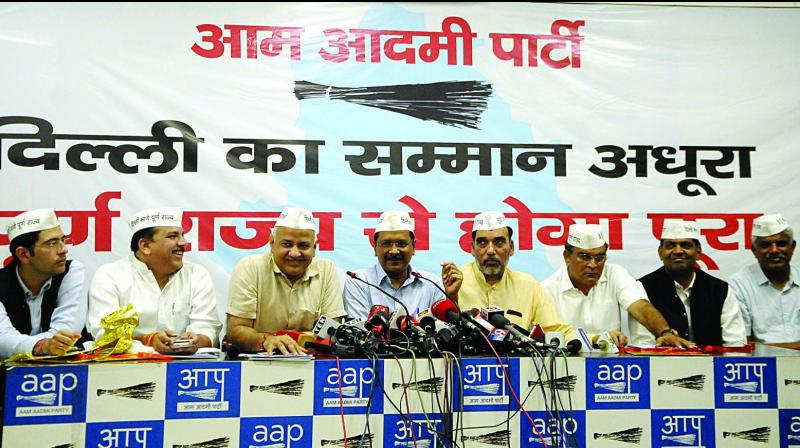 New Delhi: The Aam Aadmi Party (AAP) unveiled its election manifesto on Thursday for the upcoming parliamentary election on May 12. In its manifesto, the party promised to bring full statehood for the national capital.

While releasing the manifesto, the Delhi chief minister and AAP convenor Arvind Kejriwal said that he would extend his support to any “secular Mahagathbandhan” after the general election to stop the “Modi-Shah” duo from coming back to power.

The manifesto has been divided into two sections — about what the party did without full statehood and what it will do if statehood is granted.

The manifesto promises reservation in sectors such as education and government jobs and focuses on the demand of statehood for the national capital.

“We will secure 85 per cent of the seats of Delhi colleges for residents of the city. 65 per cent jobs of the region similarly will be secured for locals,” Mr Kejriwal said while holding its new manifesto.

Apart from Mr Kejriwal, deputy chief minister Manish Sisodia, senior party leader Gopal Rai and Sanjay Singh, along with all the seven candidates were also present at the unveiling of the poll document for the Lok Sabha election.

Voting will be held in a single phase on May 12 in Delhi.

Mr Kejriwal said that in the 2014 parliamentary polls, BJP had promised statehood for Delhi but did not fulfil it. He further alleged that Delhi residents are being treated like “second class citizens.”

“India has a 4,000 year old rich tradition. Despite its diversity, India is one and its tradition has strengthened the country which has given it power to face all kinds of attacks in the past. But today, its unity is being attacked and it is under threat. If the country gets divided on the basis of religion and caste, it will lose its centuries old tradition. This election is meant for saving India’s democracy and protecting the Indian Constitution,” said Mr Kejriwal.

The chief minister also hit out at Congress president Rahul Gandhi after AAP and the grand old party failed to form an alliance.

“What kind of alliance is formed on Twitter? I want to ask this question to Rahul Gandhi. If Modi and Shah come in power again, only Rahul Gandhi will be responsible for that,” he said.

AAP had repeatedly urged Congress to form an alliance in Delhi, Haryana, and Punjab which it said would have ensured that votes against BJP are not divided. However, the talks between the two parties failed.