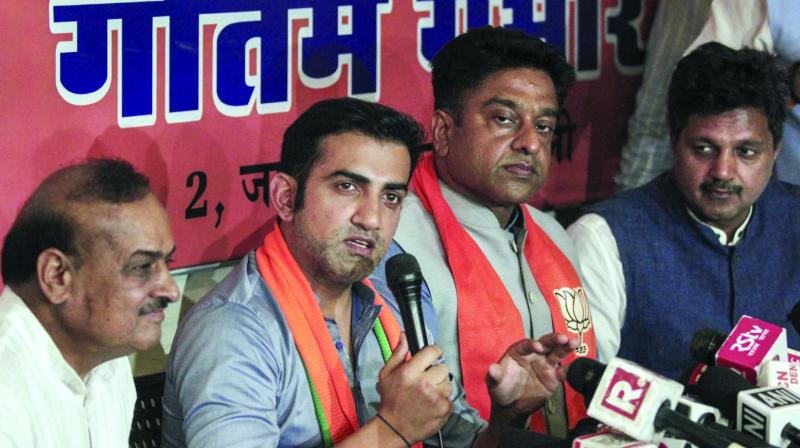 New Delhi: Former cricketer and BJP candidate from East Delhi Gautam Gambhir on Thursday said that it is easy to tweet on any issue sitting in an AC room but I am here to find solutions to the problems faced by the people. Mr Gambhir was addressing his first press conference after filling the nomination papers.

Replaying to the non-serious attitude of celebrities who join politics, Mr Gambhir said, “Tweeting from AC rooms on any issue is very easy. I have joined politics to find solutions to the problems faced by the people. I have played cricket with true spirit and now joined politics with the same intention”.

Cricketer-turn-politician, Mr Gambhir is pitted against Arvinder Singh Lovely of Congress and AAP’s Atishi in a triangular contest in the East Delhi constituency. Hitting out at chief minister Arvinder Kejriwal and rival Congress, who regularly talks about transforming Delhi into Paris and London, Mr Gambhir said, “Dilli Ko Dilli banane ki jaroorat hain, London ya Paris nahi (Delhi needs to be developed as a national capital city, not as London or Paris)”.

On the issue of statehood, the main poll plank of Mr Kejirwal’s party, Mr Gambhir alleged that the ruling Aam Aadmi Party  was raising the issue during elections to cover up its failures and four and half years of misrule.

Talking about his political agenda, Mr Gambhir said that his vision was clear and he was deeply impressed with Prime Minister Narendra Modi and would emerge victorious with the help of ‘fabulous’ team of BJP leaders and workers working hard on ground. He pointed that he played cricket in “true spirit” has joined politics with the same guiding principle.  “I am not here to make false promises. What people will speak after five years will be my view,” Mr Gambhir.