Skywalk at ITO likely to open by October first week

Mr Sisodia, who along with PWD minister Satyendar Jain, inspected the site of the project said this would be a “beautiful infrastructure” in the city. 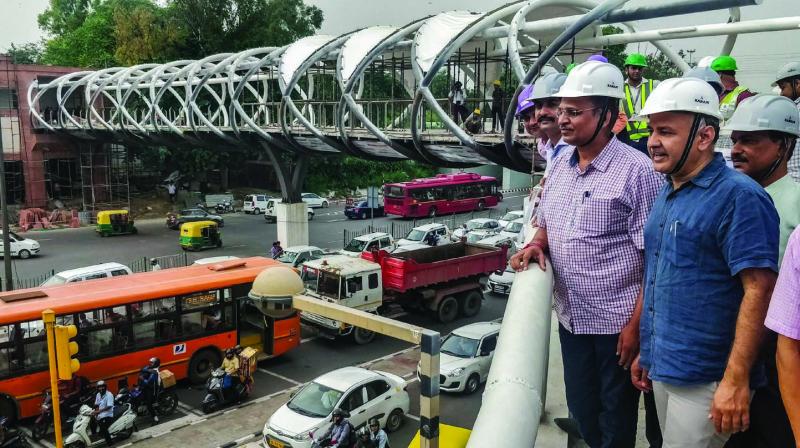 New Delhi: Delhi deputy chief minister Manish Sisodia on Saturday said that about 75 per cent work of skywalk at ITO has been completed and it is likely to be inaugurated by September-end or early October.

Mr Sisodia, who along with PWD minister Satyendar Jain, inspected the site of the project said this would be a “beautiful infrastructure” in the city.

“The work began in April, about 75 per cent work is over, and by September end or first week of October, it should be ready. This along with the Signature Bridge slated to open in October, would be two new gifts to the people of Delhi before Diwali,” Mr Sisodia said. He said besides adding to the aesthetic look of the city, the skywalk would also prove a boon for decongesting the city. “From metro stations here, people would be able to go directly to nearby locations, like ITO, Tilak Marg and Supreme Court, etc, without the need to step out on to the street from the stations,” he said.

Authorities are expecting a footfall of nearly 30,000 per day once the skywalk becomes operational. The total worth of the project is about Rs 54 crore.

“The project will be completed in six months. It will have glass lifts an solar-powered utilities and CCTV cameras. It will be very user-friendly,” Mr Jain said. Mr Sisodia, after visiting the site, also tweeted pictures, showing the current status of the skywalk.  “Construction of Sky-Walk (Delhi’s most beautiful foot-over bridge) would be complete within one month. It’ll help 30,000 commuters daily to cross roads safely, above heavy traffic at Tilak marg crossing.