Delhi tableau is back after three years, focus on schools

Manish Sisodia, who attended the 68th R-Day programme at Rajpath, also tweeted a selfie with the city’s tableau. 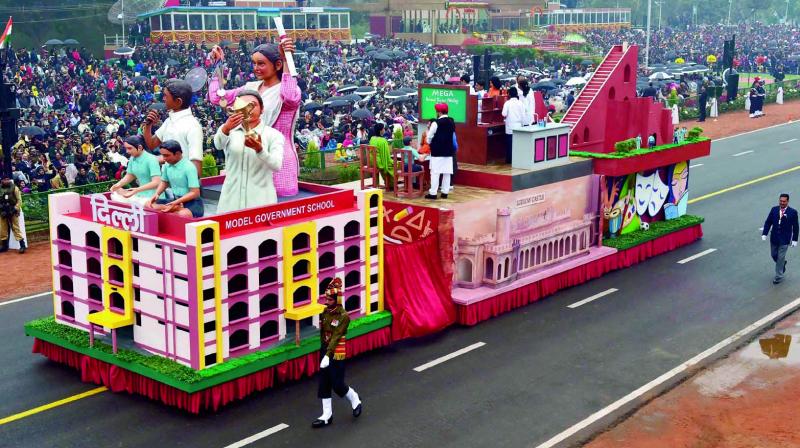 New Delhi: Delhi’s tableau made a comeback at the Republic Day Parade after three years to showcase the changing landscape of school education in the city. Set up as a “model public school,” the tableau portrayed the transformation in the state-run schools and the recent initiatives taken in the field of education.

The national capital’s tableau had last participated in the 2013 R-Day parade when the theme was “the cultural hub of the country” as the city has inhabitants coming from different regions and backgrounds. Deputy chief minister Manish Sisodia, who attended the 68th R-Day programme at Rajpath, also tweeted a selfie with the city’s tableau.

The Delhi government’s education initiatives like the model school project, mega parent-teacher meetings, and skill development centres were showcased in the tableau. The rear portion of it depicted the Jantar Mantar, an equinoctial sundial in the city. The capital’s tableau this year has been made at a cost of Rs 25 lakh, according to a Delhi government official.

The Thursday parade saw participation of 23 tableaux, the same as last year, of which 17 were from states and Union Territories. Delhi’s comeback tableau received a warm reception from the spectators at Rajpath.

In addition, six tableaux from the ministry of housing and urban party alleviation, ministry of micro, small, and medium enterprises and Council of Scientific and Industrial Research were also part of the parade.

In the past, the capital’s tableau has portrayed Delhi Metro twice, once in 2003 and again in 2006, while the Lotus Temple was depicted as a symbol of “cultural and religious harmony” in 2001.

Kargil war and Sufi poet Amir Khusro were the themes of 2000 and 2004, respectively.