The streets of Delhi was abuzz with faces painted in tricolour and heading towards Rajpath. 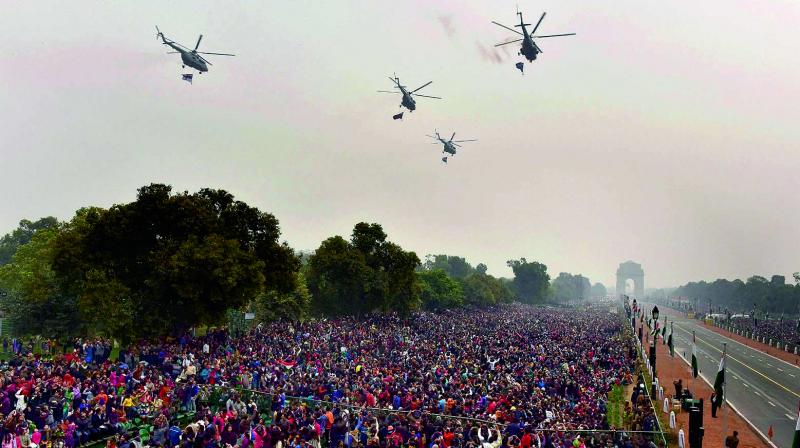 New Delhi: While the national capital wore patriotism on its arms and got soaked in the Republic Day fervour, the rains that lashed the city on Thursday morning failed to dampen the very spirit of Delhiites, who came out in large numbers to witness the 68th Republic Day Parade.

As the clock struck 5 in the morning, the streets of Delhi was abuzz with faces painted in tricolour and heading towards Rajpath. Undeterred by the early morning light showers, a sea of people gathered to become a part of the historic Republic Day Parade.

Amidst the fervour and unmoved by the light showers that began around 11.30 am, Delhiites clapped and cheered for their brave soldiers and men in uniform who performed daredevil stunts. However, as the parade concluded around 12 pm, the rain gods joined the celebrations and lashed the city.

Some people took cover under plastic sheets and some ran to take shelter under trees to save themselves from the rains. While a few came armed with umbrellas, majority of the lot used the R-Day brochures to avoid getting wet.

As daylight faded, the afternoon resembled the evening hours prompting vehicles to ply with headlights on. Vehicular movement was affected as the downpour led to water-logging in several parts of the city.

“We had come to see the parade for the first time today and it started raining immediately after the ceremony ended. I am rushing to my car but it looks like a walk of about one kilometre, I am going to get soaked. It is no point waiting for the rain to stop. I wish the preparations also included a few shelters. The rain was well expected, so that would have been a help,” said Sumit Chowdhary, who was stranded with his family near Rajpath.

While many pedestrians were left at the mercy of the rain gods as they had to walk three to four kilometres in order to get a conveyance, others chose to take shelter under the flyovers in a bid to avoid getting drenched. Later in the day, the spells only worsened the situation for scores of motorists who were left stranded for hours.

Though a sense of disappointment ran when people, who were waiting with their bated breaths, couldn’t properly see the Indian Air Force flypast owing to poor visibility, the thunderous sounds of fighter jets kept the spirits high for the spectators at Rajpath.