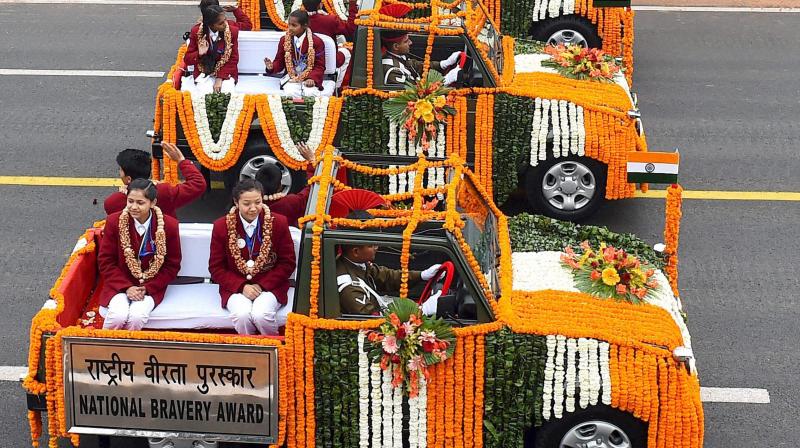 Among the posthumously awarded children was Payal Devi of Jammu and Kashmir, who lost her life when she jumped into 17-20 ft deep water in Ramban during the flash floods in the Valley to save three students, but all of them were washed away. The awardees included Tarh Peeju, who has been conferred the coveted the Bharat Award posthumously while Tejasweeta Pradhan (18) and Shivani Gond (17) from West Bengal have been selected for the prestigious Geeta Chopra Award. Tejasweeta and Shivani, both volunteers with a rights NGO, first befriended on Facebook a minor girl who had gone missing from Nepal, and who ultimately turned out to be a conduit in the trafficking ring.

Peeju, who died while rescuing two other children when they were swept away by the current in the Pachin River in Arunachal Pradesh, is among the four awardees to have been conferred the honour posthumously. The Sanjay Chopra Award has been conferred on 18-year-old Sumit Mamgain of Uttarakhand for displaying outstanding bravery in fighting a leopard to save his cousin’s life.

The National Bravery Award Scheme was initiated by the Indian Council for Child Welfare (ICCW) in 1957 to give recognition to children who distinguish themselves by performing outstanding deeds of bravery and meritorious service. In 1978, the ICCW instituted two bravery awards for children under the age of 16, the Sanjay Chopra Award and the Geeta Chopra Award, given each year along with the National Bravery Award. The Awards were introduced in  memory of the two Chopra children, who laid their lives, while confronting their kidnappers.