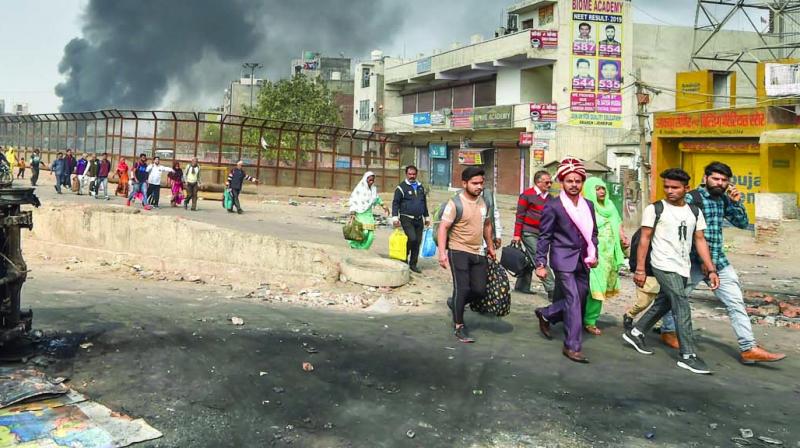 A bridegroom along with relatives heads for his wedding as they walk past Bhagirathi Vihar area. (Photo: BIPLAB BANERJEE)

New Delhi: A day after BJP MP Gautam Ghambhir sought action against those spreading hatred, party’s national vice president Shyam Jaju made it clear on Wednesday that no action would be taken against former legislator Kapil Mishra, who has been accused of inciting violence in northeast Delhi.

Mr Jaju, also in-charge of BJP’s city unit, told this newspaper that Mr Mishra has not done anything wrong and his speech on Sunday was also not provocative. He said: “As ‘jan pratinidhi’ (people’s representative) Mr Mishra spoke about the problems being faced by citizens due to road blockades. His speech did not incite any violence. And no action will be taken by the party against him.”

Mr Jaju alleged that some people were trying to put blame on Mr Mishra for the violence to save the real culprits. “Instead of pointing fingers at Mr Mishra for instigating violence, one should find out the culprit who killed head constable Ratan Lal and disturbed peace in the national capital,” he said.

Mr Jaju clarified that BJP takes action based on merits and evidence. “Right now there is no evidence against Mr Mishra which establishes that he incited violence,” Mr Jaju claimed.

Mr Jaju’s comment came as a shocker for a section of Delhi BJP leaders who have been demanding strict action against Mr Mishra for his provocative speech on Sunday. Mr Mishra, who had contested unsuccessfully the recent Assembly polls on a BJP ticket from Model Town, led a gathering in support of the CAA at Maujpur Chowk in the Jaffrabad area on Sunday, after which violence erupted between pro and anti-CAA groups.

Addressing the gathering, Mr Mishra had issued an ultimatum to the police to vacate the roads blocked by anti-CAA protesters in Jaffrabad and Bhahanpura areas within three days and warned that he would be back on the streets if no action was taken.

A senior national office-bearer of BJP said there was nothing wrong in Mr Mishra’s speech. He said that Mr Mishra had just acted as a responsible citizen and told the gathering that no one would be allowed to spread anarchy in the name of any protest. “Listen through his speech, Mr Mishra is clearly asking police to clear the road block within three days. He never talked  about violence,” he said, adding that Mr Mishra’s public address was neither provocative nor comes under hate speech.

Mr Gambhir, who is also a Lok Sabha member from East Delhi, said  that action should be taken against any party member, “whether Kapil Mishra or anyone else”, who gave provocative speeches.