‘Keen to intensify agitation till CAA is taken back, will not budge till our demands are met’ 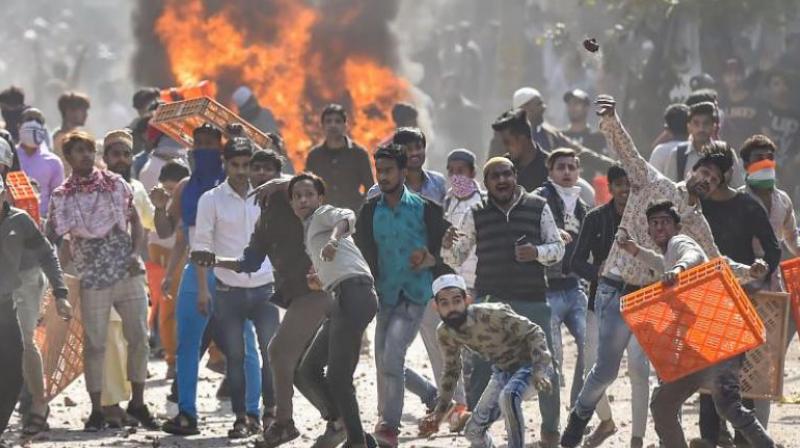 As if in solidarity with the families being targeted just 30 km away from them, the protesters at Shaheen Bagh said that they have decided to intensify their agitation till the new law is taken back by the BJP-led Central government.

New Delhi: As parts of northeast Delhi continued to suffer the pangs of the worst communal clashes in the national capital in more than three decades, the faces of the women of Shaheen Bagh, sitting in protest for 73 days against the Citizenship (Amendment) Act, reflected both, sadness and fear. But despite living in constant fear of violence and the knowledge that they can be removed forcibly at any time, they say that they have resolved not to retreat.

As if in solidarity with the families being targeted just 30 km away from them, the protesters at Shaheen Bagh said that they have decided to intensify their agitation till the new law is taken back by the BJP-led Central government.

“They want to scare us. But they are highly mistaken. We will not budge till our demands are met,” said Kehkashan Riyaz, who along with two others has been running a makeshift library for the children at the protest site. “In the coming days, you will see more protesters joining us.”

Asked why she believes that the BJP was behind the riots, Ms Kehkashan said, “Sir, it was this BJP leader who gave inflammatory speeches during elections. Now he has lost the polls. That’s why he is inciting violence.”

Not only this. Ms Kahkashan said that the country should be proud of the people who have been protesting peacefully at Shaheen Bagh. “Imagine if the Supreme Court had given a verdict on the Ayodhya dispute in our favour — you would have seen hundreds of Kapil Mishra’s creating mayhem all over the country.” Peace prevailed, she meant, because Muslims accepted the verdict.

Another woman protestor at Shaheen Bagh said that she was very must upset over the way chief minister Arvind Kejriwal has reacted to the new citizenship law. “If he has guts, he should come here on our stage and publicly announce that his AAP government will not allow NRC or NPR in Delhi… But we know. He won’t do this…”

For 25-year-old Imran, Mr Kejriwal was not the only politician who was distancing himself from the anti-CAA movement. “The plight of the Congress is even worse. They woke up after four days of violence in Delhi.”

Fardeen Khan, 40, said that people are scared as they fear anti-social elements could disturb their peaceful protest. “See, there is no security. Can you spot even a single police person in the area?” he said, while pointing at another protester who, he said, was a volunteer keeping track on all those who were moving suspiciously at the protest site. “But we are all protesting so that our future generations don’t suffer.”

Though the protesters are aware that the CAA is not a state subject as the law has been passed by Parliament, they still want a representative of the Union government to visit them and assure them that Muslims will not be discriminated in the country.

A local businessman, Ahmed, said that he has not been able to open his shop for the past 62 days. “But that does not mean I will stop protesting for my rights. If the BJP government does not take back this law, we have hope on our Supreme Court which is bound by the Preamble to the Constitution of India which clearly says serve and uphold justice, liberty and equality.”

Muslims apart, many protesters at Sheen Bagh from other faiths said they too will appeal to people to join in large numbers to defeat the fascist forces who want to discriminate one particular community in this country. For 65-year-old Alexander Fleming, participating in the protest is a pious service to the nation. Carrying a poster of Lord Hanuman, a Bible teacher from Sukhdev Vihar church said: “If we support good things, then our seat is booked in the heaven.” Like him, Amita Bag from West Bengal said she has taken a vow to join those seeking justice for themselves.