Mehandi made his dramatic entry into the BJP in the presence of Union minister Dr Harsh Vardhan, who is contesting from Chandni Chowk seat. 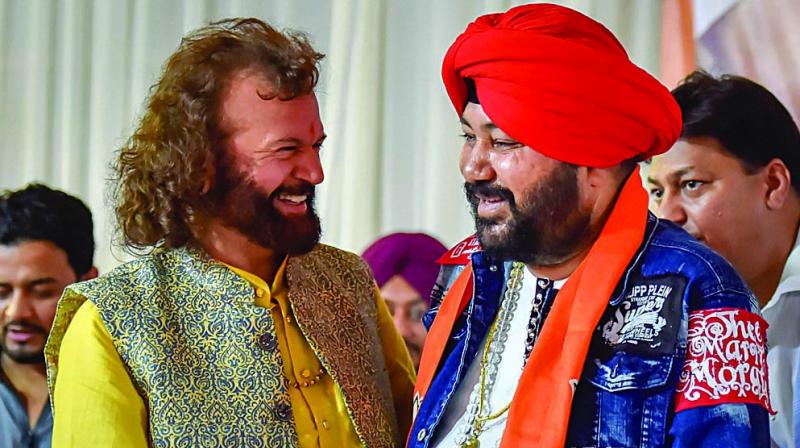 NEW DELHI: After Padma Shri awardee and sufi singer Hans Raj Hans was given ticket by the BJP to contest from the Northwest Delhi Lok Sabha seat, popular Punjabi singer Daler Mehndi on Friday joined the saffron party to campaign aggressively for its candidates not only in the nation capital but in other parts of the country as well. The BJP is being flooded by Bollywood actors who one after another are joining it. State BJP chief Manoj Tiwari, who is contesting from Northeast Delhi seat, is a popular Bhojpuri actor.

Mr Mehandi made his dramatic entry into the BJP in the presence of Union minister Dr Harsh Vardhan, who is contesting from Chandni Chowk seat. Union minister Vijay Goel and leader of the Opposition in Delhi Assembly Vijender Gupta were also present.

“I have joined BJP after seeing the dedication with which Prime Minister Narendra Modi ji has been working,” said Mr Mehndi, who was greeted with cheers by those present in the meeting. The meeting was called for an interaction of Mr Hans with the media persons.

It is not clear whether the singer will contest the national election. Earlier in 2013, Daler Mehndi had joined the Congress, just before the Delhi Assembly election.

During the press interaction, Mr Mehndi couldn’t stop himself from singing one of his own composed songs “Dil Modi-Modi bolda hun ki kariye” which has converted as campaign song for the party. He also sang one of his famous old songs “Dil chori sadda ho gya”.

“I have interacted with all sections of society and found that they are more excited than the party workers to see Mr Modi as Prime Minister again. Four Muslim countries have conferred their highest civilian awards on Mr Modi. Under his vision, we will spread ‘Rashtrawaad.’ We will not misguide the voters with fake promises and will not support tukde-tukde gang as other parties do. We will also not form any alliance like some parties are doing in fear of losing the Lok Sabha elections”, said Dr. Harsh Vardhan, the BJP candidate from Chandni Chowk.

Earlier this week, actor Sunny Deol joined the BJP in the presence of two Union ministers.