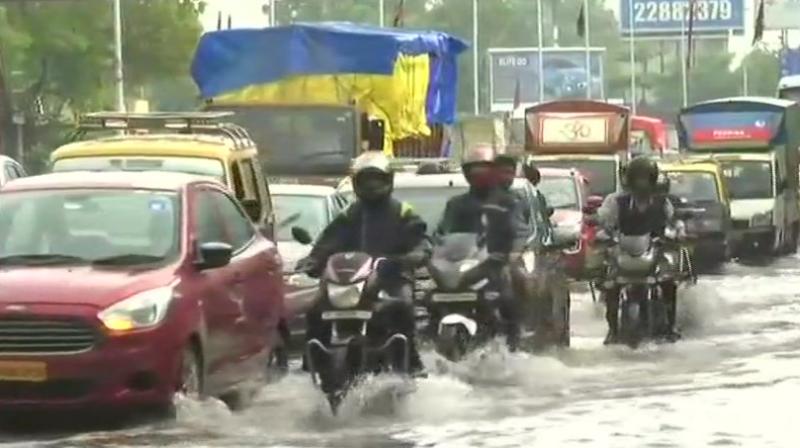 A road in Vasundhara area of Ghaziabad reportedly caved in following heavy rains in the area. (Photo: ANI | Twitter/Representational Image)

With the roads waterlogged in peak office hours, commuters and students faced a difficult time. The waterlogging has also caused massive traffic jams in many parts of Delhi.

A road in Vasundhara area of Ghaziabad reportedly caved in following heavy rains in the area.

According to traffic police, vehicular movement was affected at the Vivek Vihar underpass, Seema Puri underpass and under the Ghazipur flyover. “Traffic is also affected from Naraina T Point to Loha Mandi due to waterlogging on the Girdhari Lal Goswami Marg in west Delhi. Commuters are advised to avoid the stretch,” a police officer said.

Heavy traffic was reported from Apsara border to Shahdara, Seema Puri to Apsara border and Khaira Mor to Bahardurgarh bus stand in Najafgarh. Similarly, there was obstruction in traffic from Lal Kuan in south Delhi to Badarpur due to waterlogging. Heavy rains lashed the city overnight and continued till the morning.

“The minimum temperature recorded at 8.30 am was 26 degrees Celsius, normal for this time of the year. The humidity level was 93 per cent,” a meteorological department official said. “The maximum and minimum temperatures are expected to hover at 31 and 26 degrees Celsius respectively,” the MeT official added.The Safdarjung  observatory recorded 4.6 mm rainfall till 8.30 am, while the rainfall recorded by Palam observatory was 9.3 mm.

The traffic police issued regular advisories suggesting alternate routes on its Twitter handle for the conveniene of commuters.