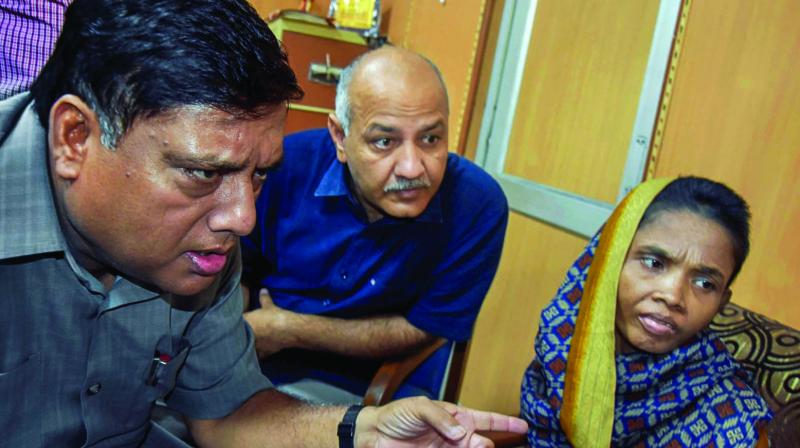 Deputy chief minister Manish Sisodia, along with an official, meets the mother of three girls who allegedly died of malnutrition at Mandawali in New Delhi on Thursday. (Photo: PTI)

New Delhi: The Delhi police has formed several teams to track down the father of the three girls who died on Tuesday allegedly due to starvation in east Delhi’s crowded Mandawali area, even as a second autopsy concluded their “stomachs were empty” and “no trace of fat” was found in their bodies.

The victims’ father, a casual labourer, left home on Tuesday morning to find work but did not return.

The police is on the lookout for him and he will be questioned in connection with the matter.

The three minor sisters were “visibly malnourished” when they were brought to a hospital and the autopsy showed that their “stomachs were empty” as if they had not eaten for over a week, doctors said.

The girls, aged eight, four, and two, were brought to LBS Hospital in Mayur Vihar by their mother and her friend at around 1.00 pm on Tuesday. The hospital authorities later declared them brought dead.

“The post-mortem was conducted on Tuesday evening itself and it was over by 6.30 pm. On Wednesday, they wanted a review. So, chemical toxicology was also suggested. A medical board was set up and a second autopsy was conducted at the GTB Hospital,” said Dr Amita Saxena, the medical superintendent of LBS Hospital.

“There were no injury marks. It looked like a typical case of malnutrition with dishevelled, monkey-like faces and no trace of fat in the bodies. The stomach, bladder, and rectum were found empty,” she said after the post-mortem.

Dr Saxena said the experts did not suspect any foul play as there was “no food in the stomach. It was as if they had not eaten anything for 8-9 days.”

“We wanted a second opinion and be doubly sure. So a second autopsy was done at the GTB Hospital,” she said.