Road caves in at Vasundhara

Owners of 80 flats in two societies have been asked to vacate. 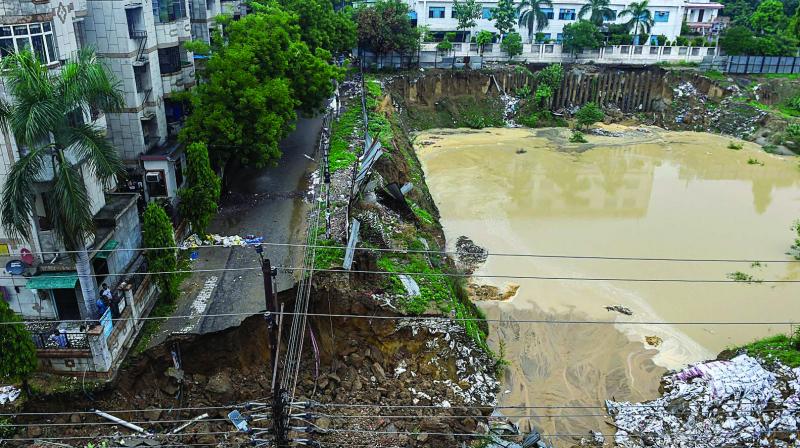 A road caves in after monsoon rainfall at Vasundhara, in Ghaziabad on Thursday. (Photo: PTI)

Ghaziabad: A road near Vartalok Society in Ghaziabad's Vasundhara colony caved in on Thursday due to incessant rains but no casualty or property damage was reported, even as a girl was killed in the district after the roof of a dilapidated house came down on her, according to the police.

As a precautionary measure,  owners of 80 flats in two societies in the vicinity of the road have been asked to vacate, they said.

Superintendent of police (City) Akash Tomar said that in Sector 4 of Vasundhara, around 4,000 metre plot was allotted to a builder four years ago for the construction of a group housing society and the basement was dug up. After a few months, the construction was closed down due to nonpayment of bank loan and the matter is now sub-judice.

The deep excavated pit, which was left for basement, filled with rain water. The water percolated beneath the road and a stretch of 30x40 feet caved in.

The district officials reached the spot and asked the residents of Vartalok and Pragya Kunj to vacate 64 and 16 flats, respectively, of  both the societies.

Rescue work is underway and JCB machines have been pressed into service to repair the damaged road, district magistrate Ritu Maheswari said.

In another rain-related incident, an eight-year-old girl, identified as Anjali, died as the roof of a dilapidated house in Shaheed Nagar colony, which collapsed due to heavy rains, the police said.