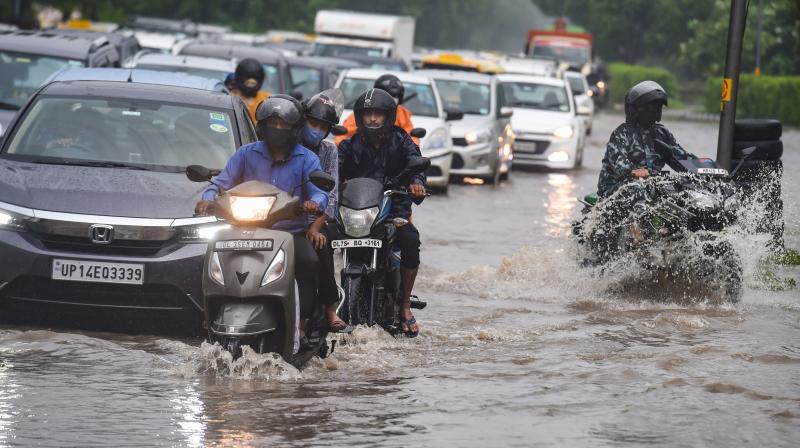 New Delhi: Heavy rains on Tuesday morning led to extensive waterlogging at several road stretches across Delhi, including near Pragati Maidan in the central part of the city and Dhaula Kuan in the southern part, affecting traffic movement.

The India Meteorological Department (IMD) said 100 mm of rainfall was recorded at the Safdarjung observatory, which provides representative data for the city, in the last 24 hours.

"Morning rain was of high intensity so a few areas of the city witnessed waterlogging. Our field staff is on the ground and we are closely observing the situation," a PWD official said.

The Delhi Traffic Police took to Twitter to inform commuters about waterlogging and the areas where traffic movement had been affected.

"Traffic is affected near Qutab Minar Metro Station towards 100 Foota carriageway due to waterlogging.

"Traffic coming from Badarpur towards Mehrauli has been diverted towards Mathura Road due to waterlogging near Pul Prahladpur," the traffic police said.

In further tweets, they said traffic is affected near Okhla Mandi, from Tamil Sangam Marg towards R K Puram and from Hyatt Regency to R K Puram Sector-12 near CNG pump.

A senior police officer said traffic has also been affected in Dhaula Kuan.

After the rains, the weather turned pleasant in Delhi.

The minimum temperature recorded at the Safdarjung observatory was 25 degrees Celsius, two notches below normal, the IMD said.

The relative humidity recorded at 8.30 am in the city was 100 per cent, it said.

The weatherman has predicted generally cloudy skies with moderate rain and the possibility of thundershowers accompanied by gusty winds with a speed of 30-40 kmph later in the day.

The IMD said the maximum temperature in the national capital is likely to hover around 30 degrees Celsius.

According to the IMD, the southwest monsoon had reached Delhi on July 13 -- 16 days behind the usual date of onset.