The temperature is expected to dip to 3 degrees Celsius after December 28. 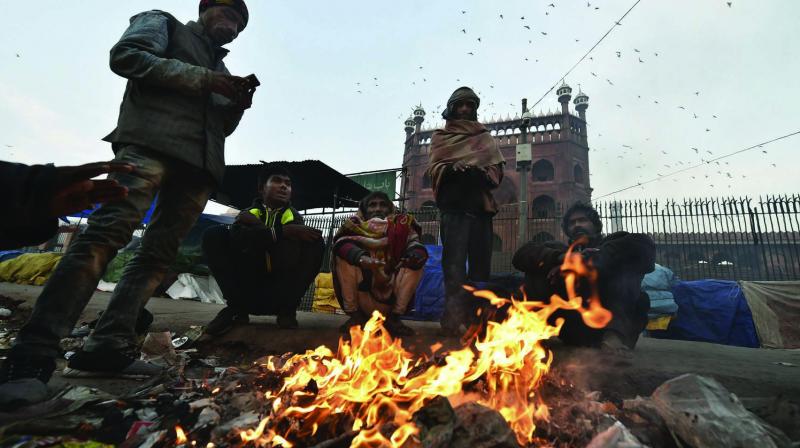 People warm themselves in front of Jama Masjid in Delhi on Wednesday. (Photo: PTI)

New Delhi: A cold wave continues across North India on Wednesday morning, with the minimum temperature dipping to 3.6 degrees Celsius in New Delhi, the lowest this winter, the met office said.

“The minimum temperature was recorded at 3.6 degree Celsius, four notches below the season’s average. It is the lowest temperature recorded so far this year,” it said.

The weatherman has predicted clear skies throughout the day on Wednesday and the maximum temperature is expected to hover around 20 degrees Celsius.

According to the met department, humidity level recorded at 8.30 am was 97 per cent. On Tuesday, the minimum temperature had settled at 5 degrees Celsius.

The cold wave also intensified in Jammu and Kashmir, with Jammu city recording the season’s coldest night at 3.5 degrees Celsius.

In Ladakh, the temperature dropped several degrees below the freezing point, with Leh recording minus 17.1 and Kargil minus 14.4. The mercury dropped to minus 6.7 degrees in Srinagar — the coldest night in 11 years — while temperatures of minus 7.9 and minus 9.4 degrees Celsius were recorded in Pahalgam and ski resort of Gulmarg.