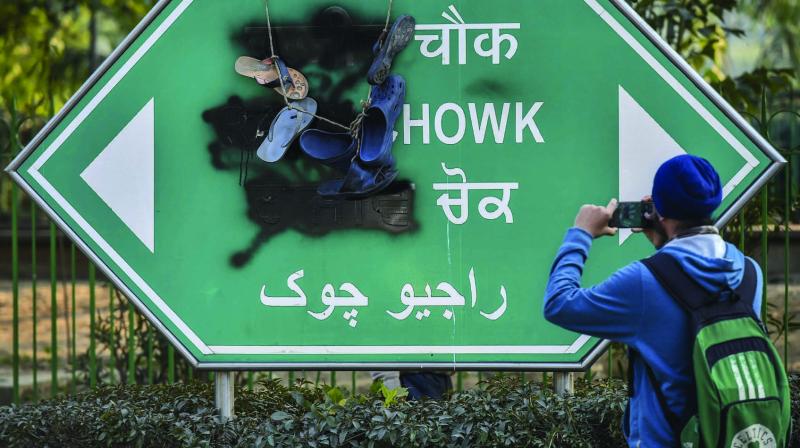 A man clicks photograph of sign board defaced with black ink in New Delhi on Wednesday. (Photo: PTI)

New Delhi: A day after a statute of the late Prime Minister was vandalised in Ludhiana by Akali Dal leaders, a group Sikh protesters vandalised and garlanded with shoes and slippers a signboard with the name of the former Prime Minister in the heart of the national capital on Wednesday afternoon.

In a photo that has gone viral, the signpost outside Rajiv Chowk Metro Station was spray painted, with “Rajiv” blackened by those who suffered in the 1984 anti-Sikh riots.

The NDMC approached the police in this regard. “A case for defacement of public property has been registered on the basis of a complaint filed by the NDMC,” DCP (New Delhi) Madhur Verma said.

The Akali Dal said the actions were justified. “We are neither supporting such things nor condemning. All the actions of the survivors are justified. If you are denied justice for 34 years, it is normal to be angry. Their anger against the Congress is obvious as the party has embraced the murders. Morally, the Congress cannot say that the act was wrong,” Akali leader M.S. Sirsa told the media.

On Tuesday, members of the Youth Akali Dal had sprayed red and black paint on the statue of Rajiv Gandhi at the Salem Tabri area in Ludhiana. The act was carried as a protest against former Prime Minister Rajiv Gandhi who they have blamed for the 1984 anti-Sikh riots.