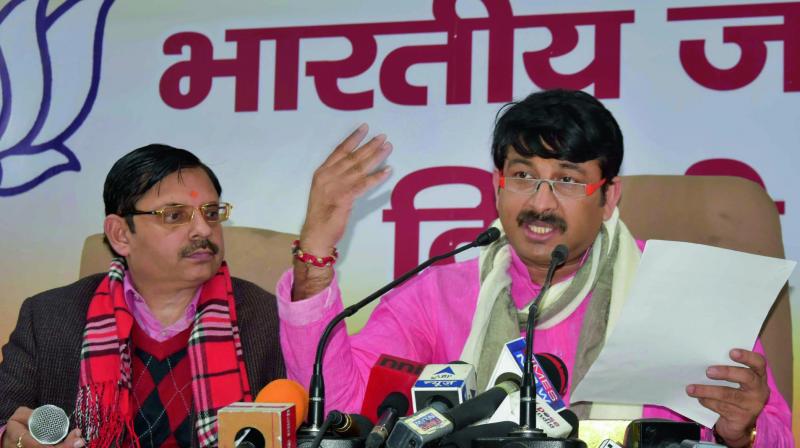 New Delhi: The Delhi BJP on Friday hit out at Aam Aadmi Party (AAP) by describing the party’s manifesto for the Assembly elections in Punjab a ‘cut-paste’ job.

The party also accused the AAP government of failing to deliver on its promises it had made during the Delhi elections in 2015.

Delhi BJP president Manoj Tiwari said the AAP manifesto for Punjab, polls reminded him of Delhi chief minister Arvind Kejriwal’s promises he had made during the 2015 elections in Delhi.

“The Punjab manifesto has many items, which are lifted from the manifesto for Delhi elections in 2015. The party  incorporated those items in its manifesto for the Punjab polls. I believe, however, that people in Punjab have seen what the AAP has done in the capital,” said Mr Tiwari.

Mr Tiwari claimed that the party has failed to deliver on its promises such as installation of CCTV cameras, employment for youth, recruitment of teachers and regularisation of guest teachers, ‘Aam Aadmi canteen’, accommodation to homeless and health and social security in the Capital.

“There is a proverb, ‘once a traitor, always a traitor’, but the chief minister of Delhi Arvind Kejriwal is becoming an expert salesman in selling false promises everywhere,” added Mr Tiwari.

The Yuva Morcha activists of Delhi BJP, meanwhile, are campaigning in Punjab to expose the AAP government and Mr Kejriwal. They will make voters in the state aware on the election manifesto of the AAP.

Gearing up for coming municipal elections, the party also held a conference of Other Backward Classes (OBCs) at its headquarters.