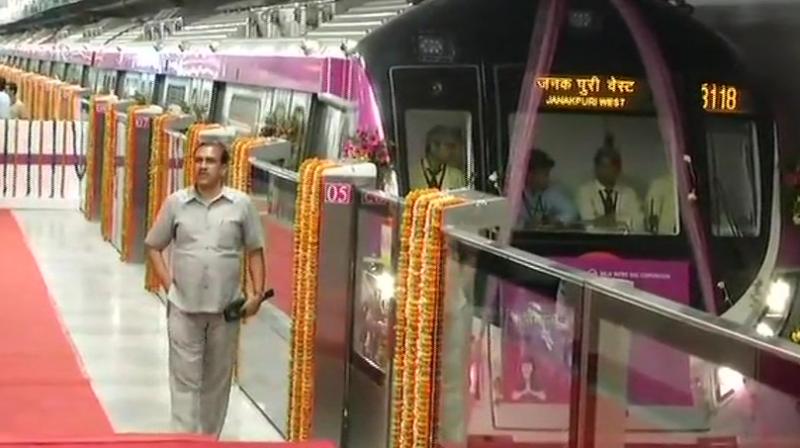 The 24.82-km Kalkaji Mandir-Janakpuri West stretch of Delhi Metro's Magenta Line will bring domestic terminal of the city airport on the DMRC network and cut travel time between Noida and Gurgaon by at least 30 minutes. (Photo: ANI/Twitter)

New Delhi: The 24.82-km Kalkaji Mandir-Janakpuri West stretch of Delhi Metro's Magenta Line was inaugurated on May 28, which will bring domestic terminal of the city airport on the DMRC network and cut travel time between Noida and Gurgaon by at least 30 minutes.

Speaking on the occasion, Kejriwal said that the Delhi government would soon take a decision on the delayed Phase IV of the Metro network.

With the opening of this section, the total operational span of the Delhi Metro Rail Corporation (DMRC) network has reached to 277 km, officials said.

Passenger services on the segment, which has 16 stations -- 14 underground, two elevated -- will begin from May 29 at 6 am from Kalkaji Mandir and Janakpuri West stations simultaneously.

After the inauguration, the dignitaries travelled in a train to the Hauz Khas metro station. At 29 metres, the five-level new Hauz Khas station is the deepest metro station in the entire network and an engineering landmark as its tunnel goes beneath that of the existing station on Yellow Line.

Hauz Khas (with Yellow Line) and Janakpuri West (with Blue Line) stations are the interchange facilities on this corridor, besides the existing Kalkaji Mandir station (with Violet Line). This section is also the longest stretch to have been opened so far in the DMRC's Phase-III project. With the opening of this stretch, the entire Janakpuri West-Botanical Garden Magenta Line corridor, covering the city's arterial Outer Ring Road, has become operational. Terminal 1 of the IGI Airport has also been connected to the metro network through this corridor, with an eponymous station on it.

On December 25, Prime Minister Narendra Modi inaugurated the 12.64-km-long stretch of the Magenta Line's Botanical Garden-Kalkaji Mandir corridor, cutting down the travel time between Noida and parts of south Delhi by more than 30 minutes. Now, with the opening of the remainder of the Magneta Line, the travel time between Noida and Gurgaon will shrink by at least 30 minutes.

"After the inauguration of this vital link, the approximate time to commute between HUDA City Centre (end of Yellow Line on Gurgaon side) and Botanical Garden (on Blue Line in Noida) stations will be about 50 minutes," a DMRC official said. "Currently, a metro journey from HUDA City Centre to Botanical Garden takes about an hour and a half with the interchange at Rajiv Chowk station," they said.

The corridor will operate with 24 trains which will gradually increase to 26 apart from the operating reserves. The frequency will be 5 minutes and 15 seconds during peak hours through the whole section and if passenger traffic demands shorter intermediate loops with higher frequency will be introduced after studying the traffic pattern, they said.

The Delhi Metro is also touting the Magenta Line as a 'Knowledge Corridor' as four major universities of the Delhi-National Capital Region (NCR), have been connected on it.