Orange alert for 'moderate to heavy' rain in Delhi

The monsoon, which arrived in Delhi on July 13 making it the most-delayed in 19 years, is now drenching Delhi, flooding low-lying areas 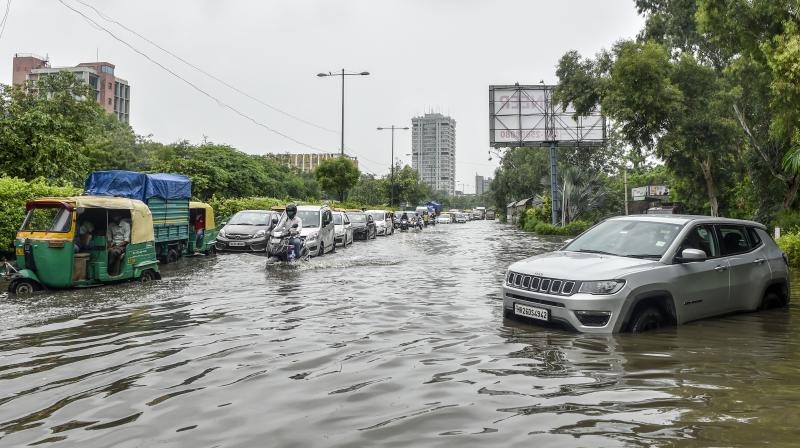 New Delhi: Another spell of moderate to heavy rain is likely in the capital on Wednesday with the India Meteorological Department issuing an orange alert, warning of major traffic disruptions and waterlogging in low-lying areas.

MeT officials said Delhi is in for a week-long spell of "light to moderate" rain with the monsoon trough passing through the region.

The capital has received 386.3mm rainfall this month so far, which is 103 percent more than the normal of 190.4mm

This is the highest precipitation for July since 2003 and the second-highest ever.

On Tuesday morning (before 8:30 am), the Safdarjung Observatory, the official marker for the city, gauged 100mm rainfall in just three hours.

The capital has recorded 15 rainy days this month so far.

The monsoon, which arrived in Delhi on July 13 making it the most-delayed in 19 years, is now drenching Delhi, flooding low-lying areas and causing long traffic snarls.

According to Mahesh Palawat, vice-president (meteorology), Skymet Weather, the number of rainy days has reduced over the last few years, and extreme weather events have increased.

"Cities are recording more rainfall in a shorter period of time. Earlier, 100 mm rainfall would occur over three to four days. Now, we have been receiving this much precipitation in just five-six hours, he said.

Such spells of rain do not help recharge groundwater and lead to flooding in low-lying areas, Palawat said.

The water percolates in the ground if it rains slowly over four to five days. In case of heavy falls, the rainwater runs off quickly, he said.

The IMD uses four colour codes: Green means all is well; yellow indicates severely bad weather. It also suggests that the weather could change for the worse, causing disruption in day-to-day activities. Orange alert is issued as a warning for an extremely bad weather with the potential of disruption in commute with road and drain closures and interruption of power supply. Red is when extremely bad weather conditions are certainly going to disrupt travel and power and have significant risk to life.