Ganga Dhaba has always been synonymous with JNU’s nightlife, its cultural ecology. 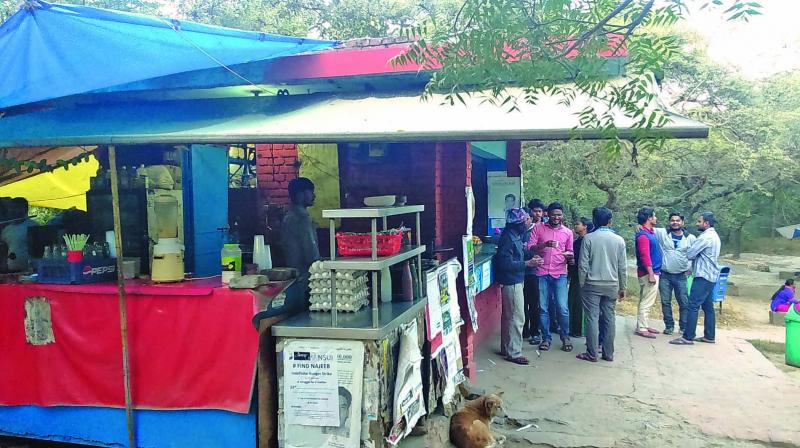 The dhaba, which over the years has become the hotspot for campus debates and discussions, is witnessing fewer crowds ever since the university’s biotechnology student, Najeeb Ahmed, went missing.

New Delhi: Apart from being one of the most political active campuses in the country, the Jawaharlal Nehru University has also given its students a cultural marker in the form of the iconic Ganga Dhaba. The dhaba, which over the years has become the hotspot for campus debates and discussions, is witnessing fewer crowds ever since the university’s biotechnology student, Najeeb Ahmed, went missing.

While speaking to this newspaper, Sushil Rathi, who took over as the owner of the dhaba from his brother-in-law Tejvir Singh in 2013, said that since the time Najeeb went missing, fewer students are gathering around the dhaba. “Half of JNU used to gather here at the dhaba even when the incident of Kanhaiya happened. Lekin jabse ye ladka Najeeb gayab huya hai, tabse bacche kam hi aate hai kyuki dharna vagera dete rehte hai. Earlier, even before the dhaba opened, there were students waiting. But now we get to know the difference,” said Mr Rathi.

Till the mid 1980s, when other dhabas used to shut down early, Ganga Dhaba’s nimboo-paani and bun-omelettes, served as late as 1.30 am, proved to be lifesavers for hundreds of students who missed their dinner. Serving food at nominal prices, the dhaba now opens up at 4 pm in the evening and runs till 3 am in the morning.

Ganga Dhaba has always been synonymous with JNU’s nightlife, its cultural ecology. From senior CPI-M leader Prakash Karat to former JNUSU president Kanhaiya Kumar, every student leader has been a part of stimulating political discussions and debates taking place at the dhaba. Carrying on with the tradition of deciding on the text and tenor of the next pamphlet, student organisations map the strategies of every forthcoming campus agitation at the dhaba.

Since the beginning of this year, JNU witnessed a series of protests — be it against the arrest of former JNUSU president Kanhaiya Kumar or the missing of Najeeb Ahmed. It was in between these protests that the varsity even saw an agitation over the iconic eatery, whose owner was served an eviction notice by the administration and asked to vacate the place.

In no time, the students started gathering at the eating joint, protesting against the alleged attack by the administration of the culture of the campus, the matter which has now been subsided.

Asking how much demonetisation has affected his business, Mr Rathi said that it has not affected the dhaba as the food prices are affordable for the students.

“Those students who are not able to pay for food, we give them credit which they pay later. But this has always been the culture of the dhaba even before this thing came up,” Mr Rathi added.