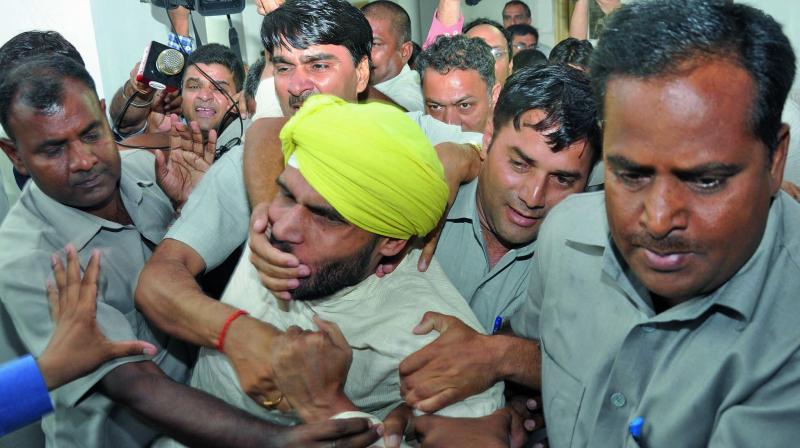 A man is whisked away by security persons after he, along with another person, threw paper missiles inside the Delhi Assembly in New Delhi on Wednesday. (Photo: Biplab Banerjee)

The men in question, wearing headgear, were sitting in the Visitors’ Gallery when suddenly they threw paper missiles inside the House and raised “Inquilab Zindabad” slogans. Soon after the interruption, the security whisked them away even as AAP legislators demanded strict action against the two men for violating the sanctity of the House.

They were then allegedly detained and beaten up inside Assembly and amid chaos, rebel AAP leader Kapil Mishra made a PCR call. One of the protesters, identified as Jagdeep Rana, who was beaten up inside the Delhi Assembly is a former AAP member and had contested from the party in 2013. The other protester is reportedly an AAP member from Punjab. The injured were then rushed to the hospital.

In the note found printed inside the paper missiles, the duo have claimed that they were AAP workers and took the step as they were unhappy with the Arvind Kejriwal-led party and the alleged “corruption cases” against Delhi minister Satyendar Jain.

Meanwhile, the Oppo-sition BJP and Congress criticised the one-month prison term handed to the two visitors. Delhi Congress chief Ajay Maken said the sentence was “harsh and against the spirit of democratic values”.

Leader of the Opposi-tion Vijender Gupta felt it was strange that the “off-ending” visitors were ord-ered to be jailed for 30 da-ys by the speaker but “not a word” was said against the AAP MLAs “who took law into their hands”.