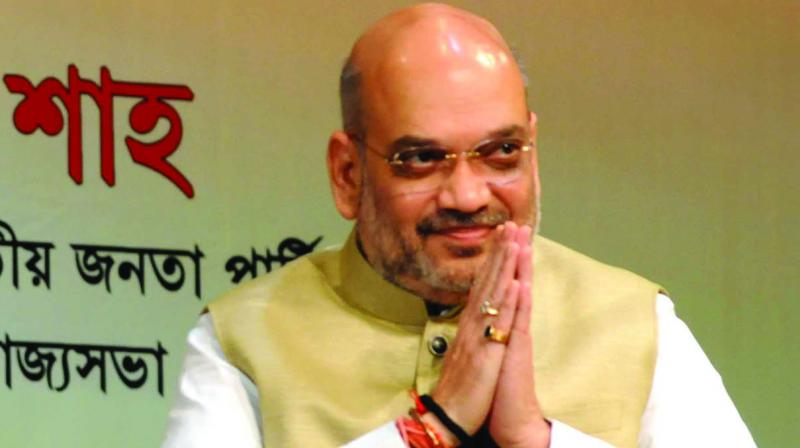 Kolkata: Lambasting BJP president Amit Shah for his challenge to oust chief minister Mamata Banerjee from power the Trinamul Congress on Thursday accused him of trying to divide the state on the communal lines. Trinamul secretary general Partha Chatterjee alleged that Mr Shah tried to influence the minds of the people by provoking them.

Referring to BJP leader Mukul Roy he claimed, “Mr Shah’s slogans are the outcome of the entry of the Paagla Dashu (mad man) to the party. He might have taught them these words which will have no impact however here. Let them tackle Delhi first before eyeing Bengal. Empty pitcher sounds more. He (read Mr Shah) is dancing now on his words. But his dance will soon come to an end.”

The state education minister reasoned, “The BJP should focus on Delhi in 2019 first. The tone he is using to influence the public will not play any effect here. Society is not divided here on the basis of cast, creed and religion. People here believe in culture and development. Their politics over Vande Mataram have no base. They have suddenly been busy with Bankim Chandra Chattopadhyay, Ramakrishna, Swami Vivekananda.”

Rebutting Mr Shah’s allegation of misappropriation of Central funds by the Trinamul government Mr Chatterjee pointed out, “Only the Central government can explain it. Where does he get so much money from? He is coming here on a chartered flight. Lot of money is spent in minor elections. No one will succeed to stop the chariot of development undertaken by chief minister Mamata Banerjee.”

State urban development minister Firhad Hakim said, “No one is denying that he visited Tarapeath to seek blessings from Maa Tara. But the Goddess will not listen to him because her disciple was Ramakrishna who always preached non-violence. Words from a murderer like Amit Shah will have no impact here.” Trinamul South Kolkata MP Subrata Bakshi said that anyone was free to move to any part of a democratic country.

He said, “We have no problem if someone visits somewhere. If it is part of any political programme of any party it is fine. But we will certainly look into it if someone tries to indulge in any divisive activities.”

Trinamul district president of Birbhum Anubrata Mondal said, “The amount of development undertaken by the chief minister is visible on the roads. I have been abused verbally by many.”

He claimed, “Today Mr Shah proved that development has ushered in the state. He saw it at Tarapeath after getting down from a helicopter. It is true development is visible on the road. That is why he did not open his mouth. He could not deny that he had nothing to say in view of the huge development under Ms Banerjee’s leadership. Not only him even Prime Minister Narendra Modi can not say anything on the development here.”

Amit Shah visited Tarapeath to seek blessings. But the Goddess will not listen to him... words from a murderer like him will have no impact... — Firhad Hakim