International Tiger Day: What lies ahead for big cat

This International Tiger Day on Sunday, India can take solace in the fact that it remains the nation with largest tiger population. 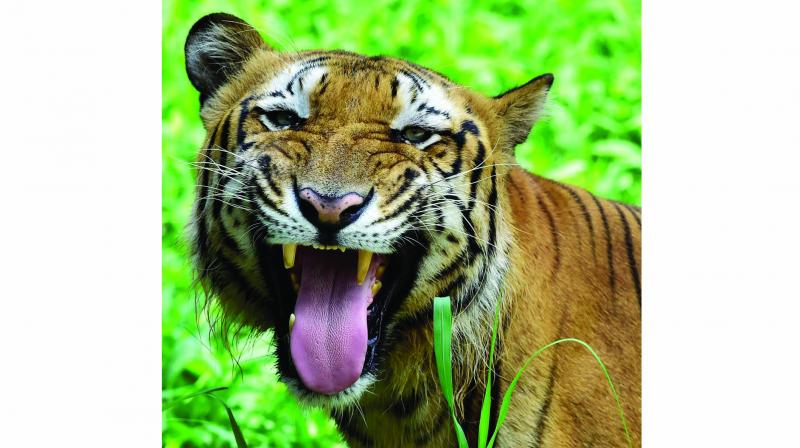 A Royal Bengal Tiger in its enclosure inside the Delhi zoo. (Photo: PTI)

New Delhi: "He is two months old. He is hungry. Scared. He is wondering when his mother is coming back."  Gunshot echoes.  "Maybe she is not." And then, an ominous message that flashes across the TV screen, "Just 1411 left".

Back in 2010, the distressed furry little face of Stripey, the tiger cub in Aircel's famous ad campaign "Save Our Tigers" brought the entire nation together.

Eight years on, that crisis seems to have been averted. The concentrated efforts of independent activists, government policies, amendments to the Wild Life Protection Act, and rising awareness have helped push the number of the wild cats to 2,226 in 2014, when the last tiger census was held.

This International Tiger Day on Sunday, India can take solace in the fact that it remains the nation with largest tiger population.

While the number is something to be proud of, experts believe issues such as  poaching, receding forest areas and development projects infringing on tiger habitat need to be tackled. If not, we are looking at a bleak future for the country’s national animal.

Leading wildlife conservationist Prerna Singh Bindra cites several infrastructure projects that will cut through tiger corridors and habitats to stress that the future of the big cat is uncertain if we continue to violate their habitat.

"Unless tigers have inviolate habitats where they can breed and flourish and there are corridors linking these breeding populations, we are isolating tigers in very small reserves which is fatal in the long run," Ms Bindra told PTI.

"What is worrying is that even the best of tiger habitats and reserves are not spared," she said, adding that highways and railway lines are being expanded in the corridor connecting Kanha and Pench tiger reserves and a railway line through Melghat tiger reserves is being expanded. Unless we factor in tiger concerns in our development agenda, unless we hold tiger habitats and the critical tiger corridors as sacrosanct we are looking at a bleak future, Ms Bindra said.

"India has one of the lowest per capita forest areas in the world. Forests as carbon sinks are deemed to be a major mean of controlling climate change. Depletion of forests is responsible for reduction of tiger habitats. I believe that forest and tiger conservation begins from grassroots, literally and metaphorically," said tiger activist Ajay Dubey.

As forest lands fall to development projects, habitable land for animals that make for the tiger's food base are also reduced.

According to Y.V. Jhala, senior wildlife scientist at the Wildlife Institute of India (WII), the country has enough forest area for the tigers to strive but the problem is the lack of food base.

"We have 300,000 sq km of forest tiger area and tigers are currently found in 90,000 sq km. So there's enough forest area out there for increasing the number of tigers. Unfortunately, this entire forest area doesn't have the prey base. It's not only about protecting the tiger but also protecting its food source," he explained.

Mr Jhala also said that the tiger population has scope to increase if the prey base is restored. "The local communities that live in and around these areas eat these animals, there is poaching there. Of course, it is illegal, but a ban is difficult to enforce,” he added.