The weatherman has predicted that the rain will continue through the night and Wednesday morning. 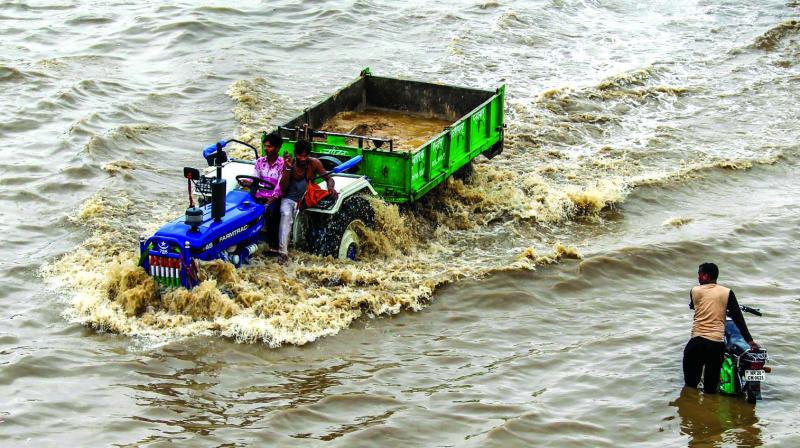 A tractor wades through a waterlogged road after heavy rains in Gurgaon on Tuesday. (Photo: PTI)

New Delhi: A 70-year-old woman died after a wall collapsed owing to heavy rains in Uttam Nagar area. Heavy rains lashed several parts of Delhi-NCR through the night with waterlogging disrupting traffic movement at many places in the national capital and Gurgaon.

The deceased, identified as Parvati, worked as a caretaker at a nearby cremation ground. Her son and grandson sustained minor injuries and are undergoing treatment at a nearby hospital.

According to information, wall collapse incidents owing to heavy rainfall were also reported in Punjabi Bagh and Rohini. However, there were no major casualties in both the incidents. Some people sustained minor injuries.

Rush hour traffic was thrown out of gear in Haryana’s Gurgaon as morning commuters were stuck in traffic snarls, including a 5 km jam on a road between Hero Honda Chowk and Kherki Daula Toll Plaza. Several residents took to Twitter to share their experiences and posted photos of waterlogging and jams.

Heavy rains lashed different parts of the national capital throughout the day leading to waterlogging, which led to traffic congestion in several parts of the city.

The weatherman has predicted that the rain will continue through the night and Wednesday morning.

“The maximum temperature was recorded at 31.8° Celsius, three notches above normal, while the minimum was 26°C, normal for this time of the year,” an official said.