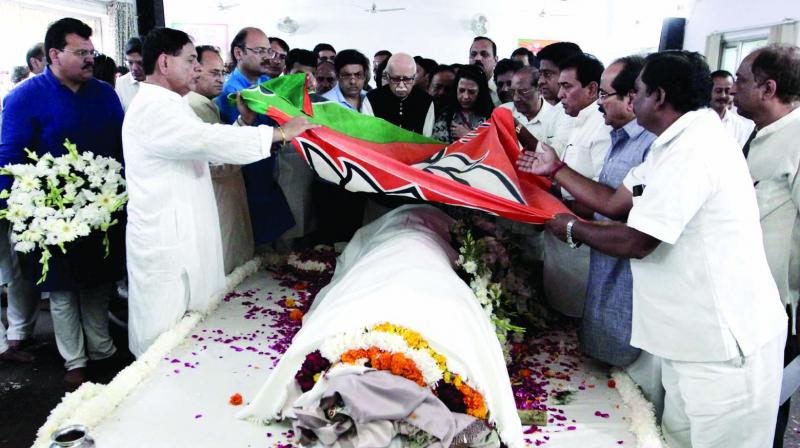 New Delhi: Cutting across party lines, leaders from Congress and AAP joined BJP leaders in paying homage to former Delhi chief minister Madan Lal Khurana, who breathed his last in the national capital on Saturday night. Khurana, who played a major role in building the party in Delhi, was also instrumental in bringing Delhi Metro, which has now become the lifeline of Delhiites.

Khurana’s last journey started at 11.00 am from his Kirti Nagar residence. His body was first taken to party’s local headquarter at Pundit Pant Marg. He was cremated at Nigambodh Ghat.

The 82-year-old leader had been suffering from chest infection and fever for the last few days. He is survived by his wife, a son and two daughters. Of his two sons, one died last month. A Bharatiya Janata Party (BJP) veteran, Khurana was the chief minister of Delhi from 1993 to 1996 and was appointed the governor of Rajasthan in 2004.

Expressing his condolences, Mr Kovind tweeted: “Sad to hear of the passing of Shri Madan Lal Khurana. As chief minister of Delhi, governor of Rajasthan, and Union minister, he contributed immensely to public life and particularly to the well-being of the national capital and its people (sic).” The PM tweeted, “Shri Madan Lal Khurana Ji will always be remembered for the manner in which he strengthened the BJP in Delhi. He made unwavering efforts towards serving the post-partition refugees in Delhi. My thoughts and solidarity with his family and supporters.”

“Learnt of the unfortunate demise of former Delhi chief minister and BJP leader Madan Lal Khurana. He will be remembered as an ideal swayamsevak and a dedicated Vidyarthi Parishad worker and a strong pillar of the Jan Sangh and the BJP,” BJP chief Amit Shah tweeted in Hindi.

Uttar Pradesh chief minister Yogi Adityanath said, “He will be remembered for his work. I express my condolences for the bereaved family.”

Khurana’s arch rivals — Jagdish Tytler and Sajjan Kumar from Congress — also expressed grief over the death of the veteran leader.