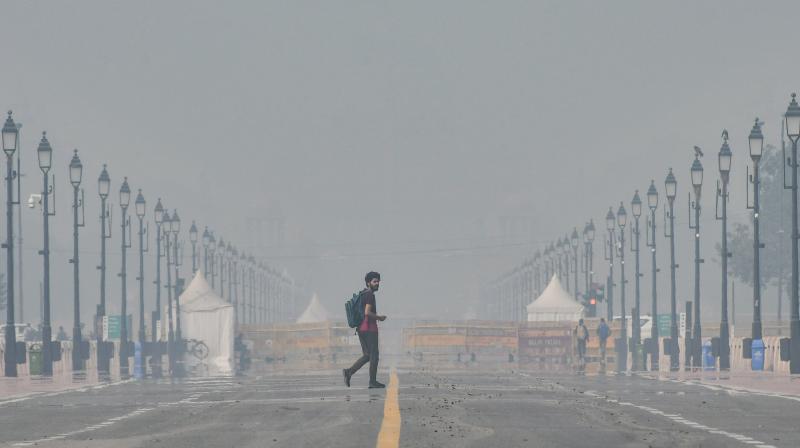 A man walks amid low visibility due to smog, at Kartavya Path in New Delhi, Saturday, Oct. 29, 2022. A layer of pungent haze lingered over Delhi on Saturday morning as the city's air quality neared the "severe" zone. (PTI Photo)

New Delhi: A layer of pungent haze lingered over Delhi on Saturday morning as the city's air quality neared the "severe" zone amid adverse meteorological conditions -- low temperatures and calm winds -- and an increase in incidents of stubble burning in Punjab.

An official of the Commission for Air Quality Management (CAQM) said authorities will review the situation in the evening and may take a call on implementing anti-air pollution measures under stage three of the Graded Response Action Plan (GRAP) which include a ban on construction and demolition activities in NCR, except on essential projects, and restrictions on the plying of BS III petrol and BS IV diesel four wheelers.

The India Meteorological Department (IMD) said calm winds prevailed at night. Moderate wind speed (up to 8 kmph) is predicted during the day, it added.

In cold conditions, pollutants are trapped close to the ground because of low mixing height -- the vertical height in which pollutants are suspended in the air.

A CAQM official said a call on implementing curbs under stage three of GRAP is likely to be taken on Saturday evening.

If AQI turns "severe", authorities are required to enforce a ban on construction and demolition activities in NCR, except on essential projects (like railways, metros, airports, ISBTs, national security/defence-related projects of national importance) and non-polluting activities such as plumbing, carpentry, interior decoration and electrical works.

Brick kilns, hot mix plants and stone crushers not operating on clean fuels, and mining and associated activities in NCR will also be banned.

GRAP is a set of anti-air pollution measures followed in the capital and its vicinity according to the severity of the situation.

SAFAR, a forecasting agency under the Union Ministry of Earth Sciences, predicted that the share of stubble burning in Delhi's pollution is likely to increase in the coming days.

The contribution of stubble burning to Delhi's PM2.5 pollution has so far remained low (up to 7 per cent) due to a prolonged rain spell in early October and slow transport-level winds which were not strong enough to carry smoke from farm fires to the national capital.

The Indian Agricultural Research Institute (IARI) reported 2,067 farm fires in Punjab on Friday, the highest so far this season. It logged 124 and 34 cases of stubble burning in Haryana and Uttar Pradesh, respectively, on Friday.

Along with unfavourable meteorological conditions, paddy straw burning in adjoining states is a major reason behind the alarming spike in air pollution levels in the national capital in October and November. Farmers set their fields on fire to quickly clear off the crop residue before cultivating wheat and vegetables.

As per the Indian Agricultural Research Institute, Punjab reported 71,304 farm fires between September 15 and November 30 last year and 83,002 farm fires in the corresponding period in 2020.

Last year, the share of farm fires in Delhi's PM 2.5 pollution peaked to 48 per cent on November 7.