The woman studies in New Delhi and had come to Greater Noida to see her friend. 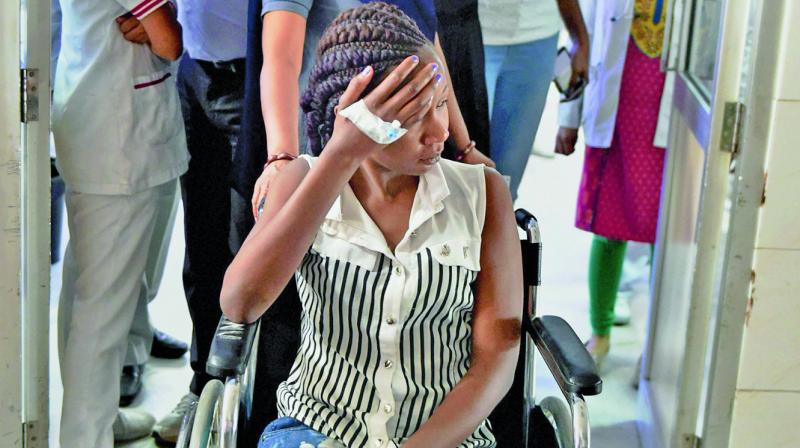 The Kenyan student, who was thrashed by some men, receives treatment at a hospital in Greater Noida. (Photo: PTI)

Greater Noida: A young Kenyan woman was attacked by a group of men in Greater Noida on Wednesday, in a third such attack on Africans in three days in the Uttar Pradesh town near Delhi.

The woman, identified by the police as Maria Burendi, alleged that she was dragged out of a cab, slapped and punched in the abdomen without any provocation by a group of locals near Alstonia Apartments in Sector Pi 1&2.

The woman, said to be in her 20s, was taken to a hospital for a medical examination where doctors confirmed the possibility of an assault, with abrasions on her hands.

“There are no visible injuries on her body. She was discharged after the first-aid,” said a doctor at Kailash Hospital.

On Monday, four Nigerian students were beaten up by a group of residents following the death of a local teenager from a suspected drug overdose. Violence escalated the next day when two Nigerian brothers were attacked by a mob inside a shopping mall.

“On the basis of the compliant, we have registered a case of rioting and attack on the woman. Four police teams have been formed to arrest those involved in the crime,” said SSP Dharmendra Singh.

In her statement to the police, the woman said that four-five people came in front of her cab and stopped it. They dragged her out of the car and assaulted her, she said, adding, the driver fled the spot during the scuffle.

“The driver has said he dropped the woman safely. We will make him confront the woman,” said a police official.

The woman studies in New Delhi and had come to Greater Noida to see her friend.

SP (rural) Sujata Singh, said, “The victim is in deep trauma.” The police has assured a swift action into the matter.

Alstonia Society is mostly occupied by Africans, and miscreants must have targeted vehicles going towards the area, said a senior police official.

“We have shared contacts of police officials with African students and asked them to call for any kind of assistance,” she added.

After the spate of such incidents, more cops have been moved to Greater Noida, an additional rapid action force and quick-response teams are also being sent there, she said.

The African Students’ Association has released an advisory on their Facebook page asking students to stay indoors. Officials from the Nigerian high commission went to meet the injured students, while the police and residents’ associations held meetings with the representatives of African students.