The protest saw students from St. Columba’s School and Delhi Public School among others. 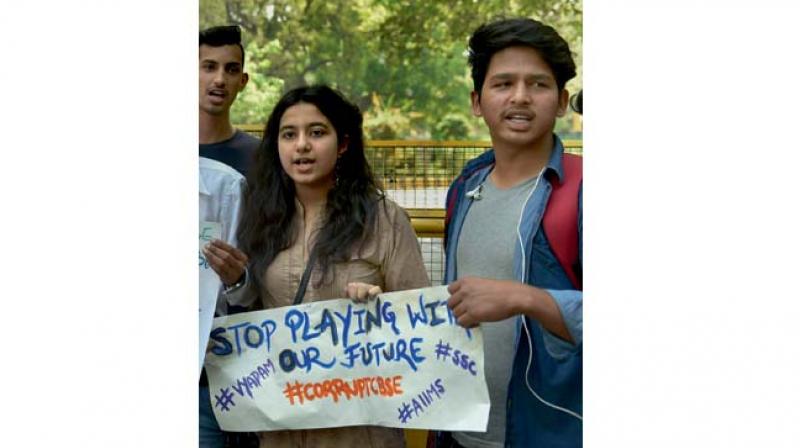 While some students gathered at Jantar Mantar, holding placards with slogans like “stop playing with our future,” some also protested outside the CBSE (Central Board of Secondary Edu-cation) headquarters at Preet Vihar in East Delhi.

Many students claimed that almost all the papers had been leaked a day before the examinations and demanded that if a re-examination is to be held, it should be done for all the subjects.

The protest saw students from St. Columba’s School and Delhi Public School among others. Many of the students were accompanied by their parents, who also took part in the protest.

“This is unjust for students who prepared hard for the exams. Now, owing to the mischief of some, all students will have to undergo the pressure again,” said a parent participating in the protest.

Holding a placard which read ‘CBSE needs to be held accountable,’ a student said: “When the news first broke, they kept denying all throughout that there was no leak. They should have cancelled the papers then itself.”

On Thursday, the Delhi unit of the All India Democratic Students’ Organisation (AIDSO) also demanded a high level probe into the CBSE question paper leak case, and said it showed the board’s “utter negligence” in conducting the examinations fairly.

The students’ body staged a demonstration at the Parliament Street against the leakage of question papers of two subjects. It accused the Central government of making false claims in providing good governance.

“We demand high level inquiry into the leaks and appeal to the students and parents to initiate a movement till all their demands are met,” AIDSO vice president Rahul Sarkar said.

“It has shocked lakhs of students, who had prepared day and night for the exams. This system has failed to stop corrupt practices and those people, including high officials, who are busy in making money at the cost of the future of students,” he added.