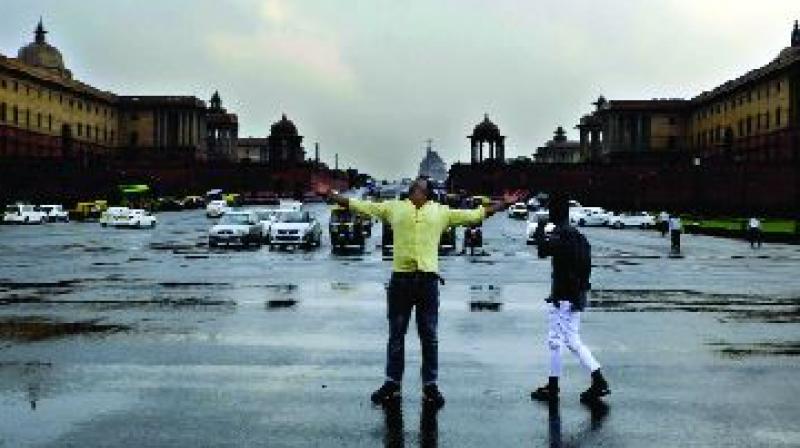 Tourists enjoy the heavy downpour at Vijay Chowk in New Delhi on Friday. Rains lashed parts of the city, causing the humidity level to shoot up to 90 per cent even as the mercury settled at a notch below normal. (Photo:Pritam bandyopadhyay

New Delhi: After almost a year, Delhi-ites breathed the cleanest air this week, thanks to the monsoon winds washing away the dust and bringing the air quality in the “satisfactory” level.

The south-west monsoon hit the city this week with light rain on Monday and heavy showers on Thursday, bringing respite not only from the scorching heat but also from the pollution which had peaked to unexpected levels this month.

The air quality index value for the capital was a “satisfactory” 83 on Frid-ay. It touched this level on Wednesday after the hea-vy pre-monsoon showers, according to the Central Pollution Control Board (CPCB) data.

The last time Delhiites breathed such clean air was in August last year, an official with the CPCB said.

The concentration of PM10 (particulate matter) and PM2.5 in Delhi’s air was recorded at 95 and 51 ug/m3 (microgramme per cubic metre) respectively, acco-rding to Safar (System of Air Quality and Weather Forecasting and Research) agency.

“The air quality will further improve on Saturday and in the coming days. The monsoon winds cleaned the dusty air and brought the air quality to satisfactory level,” said Gufran Beig, project director, Safar.

The air quality might even touch “good” level in the coming days, he added.

The PM10 level in Delhi’s air touched a peak of 1200 ug/m3 (microgramme per cubic metre), which is three times the severe limit, on June 13 when Delhi plunged into environmental emergency during June 12-17 due dust storm originating from neighbouring areas. of Rajasthan and adjoining areas of Pakistan.