The stir by resident doctors in Delhi, who have been protesting over delay in NEET-PG 2021 counselling, entered its 13th day on Wednesday 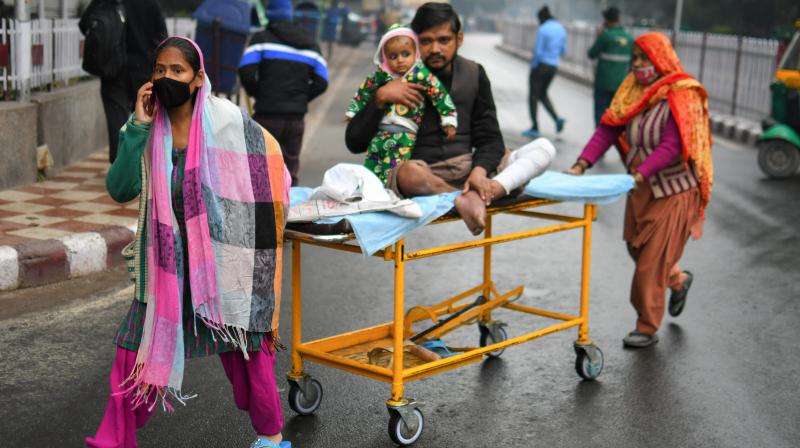 : A patient leaves after he could not be attended due to doctors' protest over the delay in NEET-PG 2021 counselling, at the Safdarjung Hospital in New Delhi (PTI Photo)

New Delhi: Patient care was badly affected at several major hospitals in New Delhi on Wednesday as resident doctors protesting over the delay in NEET PG counselling intensified their agitation even as members of more RDAs joined the stir in the national capital, as well as some other parts of the country. The resident doctors’ association of the Rajiv Gandhi Super Specialty Hospital (RGSSH) on Wednesday morning issued a statement that its members were “withdrawing services” to protest against the alleged police action in a face-off between them and medics on Monday, and demanded expediting of the NEET PG counselling process.

Located in East Delhi, RGSSH, under the Delhi government, is one of the key facilities for treatment of Covid-19 in the city.

“Senior residents and junior residents have boycotted services from today. But we are trying to compensate with consultants so that patient care is not much affected,” a senior official of the hospital said, adding that about 900-2,000 patients visit its OPD daily.

Visuals emerged on social media of doctors at the Chacha Nehru Bal Chikitsalaya and Northern Railway Central Hospital holding banners with messages like “Black day for medical fraternity”, “Couselling karao, doctors bulao”, and chanting slogans such as “We want justice”.

The stir by resident doctors in Delhi, who have been protesting over the delay in NEET-PG 2021 counselling, entered its 13th day on Wednesday.

The president of the Federation of Resident Doctors’ Association (FORDA), Dr Manish, said: “The strike is still on”.

Due to the stir, patient care has been affected at three facilities run by the Central government at the Safdarjung, RML and Lady Hardinge Hospitals and some Delhi government-run hospitals too. On Tuesday, FORDA had decided to continue the stir as a meeting between their federation’s delegation and the Union health minister failed to make any headway.

The meeting between a FORDA delegation and health minister Mansukh Mandaviya had taken place at Nirman Bhavan, but the doctors’ body had said the “response was not satisfactory”. Dr Mandaviya had urged them to call off their strike in the larger public interest.

The resident doctors in Delhi on Wednesday morning gathered in the premises of Safdarjung Hospital, where police personnel were deployed to ensure the maintenance of law and order. According to the police, adequate police arrangements have been made at Safdarjung Hospital, where more than 1,000 protesting resident doctors have gathered raising their demands.

A senior police officer said the protesting residents were made aware of the “yellow alert” issued in the national capital on Tuesday in view of the prevailing coronavirus pandemic situation.

The police officer said: “We urged them (protesting doctors) to follow the Covid protocols, maintain social distancing. We have told them that as per the new DDMA guidelines, such type of gatherings are not allowed, and we urged them to discontinue their protest.”

“The entire nation looks up to doctors and if doctors themselves gather in large numbers, there is more threat of spreading Covid-19, and in that case, who will treat the patients? We are trying all measures to create awareness and convince the protesting doctors to call off their protests, amid the rising cases of Covid-19 and the scare of Omicron,” he added.

When the protesters questioned the police about rallies allegedly being held elsewhere amid the yellow alert, they responded the “law is equal for all”, and no such activity will be allowed as per the DDMA guidelines which are being “followed strictly”.