Government to move top court for ban on sealing 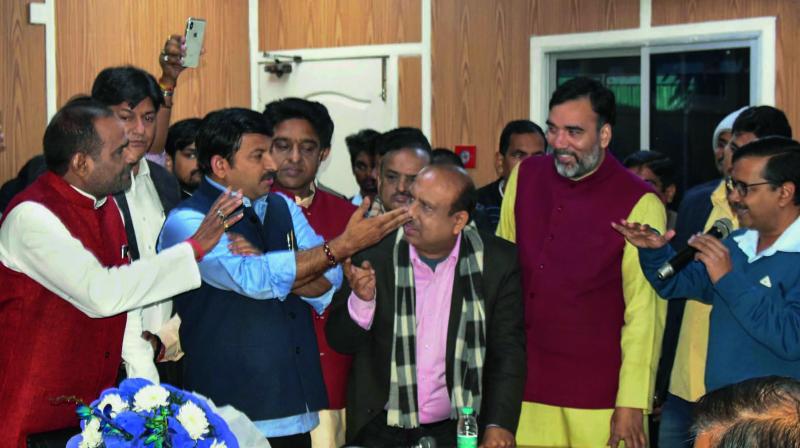 Delhi BJP president Manoj Tiwari with chief minister Arvind Kejriwal and other leaders during a debate at the CM’s residence in New Delhi on Tuesday. (Photo:PTI)

New Delhi: Delhi chief minister Arvind Kejriwal on Tuesday said that his government will move the Supreme Court seeking a “temporary ban” on the ongoing sealing drive in Delhi, after his meeting with BJP leaders on the issue ended in hostility. A BJP delegation, led by its Delhi unit chief Manoj Tiwari, walked out of the meeting at Mr Kejriwal’s residence, alleging the AAP government wanted to “divert” the attention.

Leader of Opposition in the Delhi Assembly, Vijender Gupta, alleged that AAP leaders and workers misbehaved with the visiting members of the BJP delegation during the meeting. Mr Gupta charged that AAP workers entered into a scuffle with BJP workers. He said a police complaint against AAP legislators and others over the incident has been filed.

The complaint filed by Delhi BJP general-secretary Ravinder Gupta with Civil Lines police station named AAP MLAs Jarnail Singh, Akhilesh Tripathi, Rajesh Rishi and Jitender Tomar. Mr Tiwari said the BJP delegation walked out of the meeting as Kejriwal had converted it into a “public rally”. “We sensed their dangerous mood and felt that he was not interested in finding a solution to the problem,” he charged.

Mr Kejriwal said he was “sad” that the BJP did not participate in the meeting. He announced the Delhi government will approach the Supreme Court seeking a temporary ban on the drive being carried out by the saffron party-led civic bodies against properties allegedly violating the civic norms. “I am sad that this meeting could not take place. We will go to the Supreme Court for a temporary ban on sealing this week,” he said.

Mr Kejriwal said if the Centre, the L-G and the BJP wanted, not a single shop would have been sealed in the national capital, alleging that the saffron party was doing politics on the issue.

“Although the BJP delegation had come for a discussion over sealing, they did not raise this issue in the meeting. Manoj Tiwari raised only two issues — unauthorised colonies and 351 roads, which have nothing to with the ongoing sealing drive. On 351 roads, there is no sealing yet, but despite this, BJP is raising this issue again and again,” chief minister  Kejriwal said.

He also said the BJP was diverting the attention from the sealing drive.

On the BJP’s claim that AAP MLAs attacked its leaders during the meeting, Mr Kejriwal said that the BJP was levelling “baseless allegations”.

“If any MLA has misbehaved with them, I will throw him out (of the AAP)... Recently, I had written to the LG on the sealing issue and suggested four steps to give a relief to traders, but it is unfortunate that the Centre and L-G is not taking immediate step to stop the sealing,” Mr Kejriwal said.

He added that BJP leaders wanted a “closed-door” discussion, but he denied it, saying there should be an open discussion on sealing drive that’s why he had also called AAP MLAs and councillors for the meeting.

Meanwhile, Mr Kejriwal visited markets in Chandni Chowk and other areas and interacted with traders hit by sealing drive. He said he will visit other markets later in the day.

Civic bodies have undertaken the sealing drive initiated by a Supreme Court-appointed Monitoring Committee. Commercial premises have been sealed for failing to deposit conversion charges according to provisions in Master Plan 2021.

The AAP has demanded that the Central government should either bring an ordinance or amend Delhi Master Plan 2021 to stop sealing. The BJP, on the other hand, demanded that the AAP dispensation should come out with a notification on mix land use to give a relief to the city’s traders.