Case against him related to hiring of creative team for PWD. 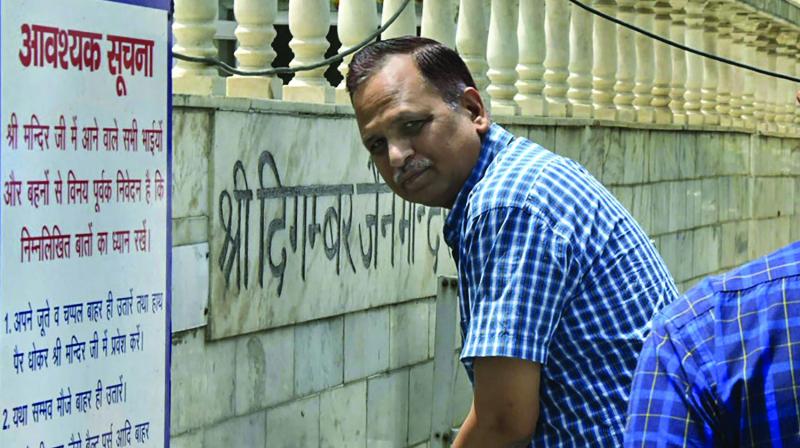 New Delhi: The CBI on Wednesday booked Delhi minister Satyendar Jain in a case related to the to alleged corruption in hiring a creative team for the Public Works Department (PWD) to suggest new architectural designs and bring down costs.

The agency sleuths carried out searches at various locations, including the residential premises of Mr Jain and other accused in the matter. In a tweet, the minister said the agency was carrying out searches at his residence. “Professionals were hired for different projects. All were forced to leave by the CBI,” he said on the social media site.

The CBI had registered a preliminary enquiry in the matter on April 5 last year and converted it into a regular case after it allegedly found prima facie evidence. During a year-long preliminary enquiry, the CBI said it found that Mr Jain had allegedly entered into a criminal conspiracy with the officials of the PWD to award the tender to Soni Detective and Allied Services for hiring the creative team for the department’s works.

It alleged that the accused abused their official position to change the terms and conditions of the notice inviting the tender to bring within the eligibility criteria the company, which had no prior experience of such work. The order, issued by OSD to Mr Jain, D.C. Goel, had proposed hiring of the creative team for PWD works for elaborate brain storming and planning not only architectural designs of government buildings, but also developing cost-effective methods of construction, it said.

In September 2015, it was proposed that young professionals from reputed institutions such as the IITs, NITs, NID, SPA and IIMs could be hired with monthly emoluments ranging from Rs 50,000 to Rs 1 lakh for the creative team as the PWD did not have such in-house capacity, the enquiry report said. “No minutes of any meeting held by Satyendar Jain, minister of PWD, are available based on which this decision to hire the creative team was purportedly taken. Similarly, there was no request from the PWD for hiring of such a creative team,” the agency alleged.

The CBI alleged that the funds which were to be spent for the team from the department of the accounting head of the elevated corridor for the Barapullah-III project, were “dishonestly” changed for the purpose of Mohalla clinics on February 19, 2016.