Lawyer Prashant Bhushan contended that what was happening was more dangerous than the Emergency. 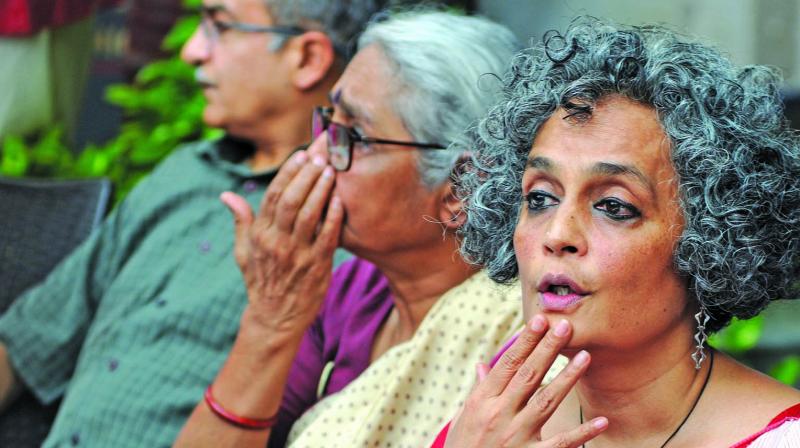 New Delhi: Leading intellectuals and civil society members on Thursday demanded action against Maharashtra police for launching a “vicious and malafide attack” against human rights activists and called for an immediate end to “such political acts of vendetta”.

Booker prize winner and civil rights activist Arundhati Roy likened the arrests of leading left-leaning activists as a “coup on Constitution” and an attempt to fracture the growing solidarity of Opposition against the backdrop of declining popularity of the Modi government.

“This is potentially dangerous than the emergency (declared in 1975). Supposedly, the emergency was to implement law and order and constitution. Of course, it was violating civil rights. This is an attempt to overturn the Constitution and declare India an upper caste Hindu Rashtra in which minorities and all others who are not agreeing to the majority are criminalised,” she said at a press conference in the national capital.

“From now on to elections, there will be a continuous circus of arrests, assassinations, lynching, riots...we are living in dangerous times. There will be a ruthless attempt,” she said.

Activists and former members of the National Advisory Council Aruna Roy said, “There is failure of rule of law and failure to respect Constitution in all aspects. There is full Constitutional breakdown. The message to poor, Dalits, adivasis is that if you raise voice, we will take strong action.”

Gujarat MLA and dalit activist Jignesh Mevani said, “They want to divert attention from real issue and discredit the dalit movement. The so call Maoist plot to Kill the prime minister is an effort to garner sympathy. Dalits will hold protest rallies at various places on September 5 against the government.”

Lawyer Prashant Bhushan contended that what was happening was more dangerous than the Emergency.

On Wednesday, the Mah-arashtra police arrested Varavara Rao, Vernon Gonsalves, Arun Ferreira, Sudha Bharadwaj and Gautam Navlakha, and raided the homes. Homes of several others were also raided as part of probe into the ‘Elgar Parishad’ conclave in Koregaon-Bhima village near Pune on December 31 last year.