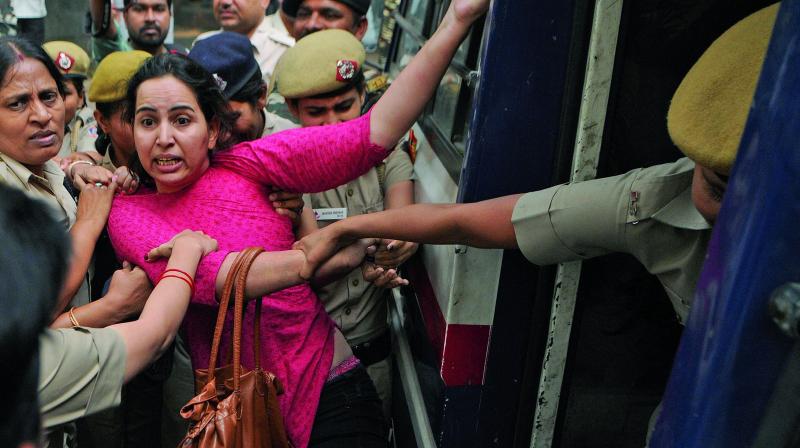 Police personnel evict family members of ex-servicemen from Jantar Mantar following an NGT order in New Delhi on Monday. Ex-servicemen have been agitating for OROP (One Rank One Pension) on the spot for the past two years. (Photo: Biplab Banerjee)

New Delhi: Armed with an National Green Tribunal (NGT) order banning protests and dharnas around the historic Jantar Mantar in New Delhi, the police and civic officials on Monday demolished tents and makeshift structures set up by ex-servicemen protesting there demanding implementation of the One Rank One Pension (OROP) scheme.

The former servicemen have been protesting there for the past many years and the police said the exercise was carried out after the October 5 order of the NGT. The police also said the protesters were informed about the NGT order in advance and asked either to leave or bring a stay order from the court.

However, the ex-servicemen termed it “an attempt to throttle our voice in a democracy”. Major General Satbir Singh (Retd), who is among those spearheading the protest at the site, said the police and municipal officials came with a JCB machine and demolished their tents and other temporary structures.

“They also took away our equipment and other stuff like beddings at around 8.45 am. We have been protesting peacefully demanding implementation of the OROP scheme,” he said. “It is an attempt to throttle our voice in a democracy. And, even if there has been any order from any tribunal, there is a way to do things. What they have done is completely unfair and unjust,” he added. Maj. Gen. Singh further said the wife of an ex-serviceman was inside the tent when the exercise was carried out.

He, however, clarified that nobody was hurt. The police denied use of any force. “The OROP protesters were informed about the NGT’s order about vacating the Jantar Mantar area and asked to either leave or bring a stay order from the court,” a senior police official said.

The NGT had on 5 October banned all protests and dharnas around the historic Jantar Mantar, which has been a hotspot of many agitations for decades, saying such activities violate environmental laws. The green panel had also directed the New Delhi Municipal Council (NDMC) to remove all temporary structures, loudspeakers and public address systems from the stretch of the road.

The NGT had ordered the NDMC chairman, the police chief and the Delhi government to file compliance reports within five weeks from 5 October.

The NGT’s verdict had come on a plea filed by Varun Seth and others alleging that processions and agitations held by social groups, political parties, NGOs at the Jantar Mantar Road were a major source of noise pollution in the area.