Chandane told The Asian Age on Wednesday that, there were many reasons for the fall in prices. 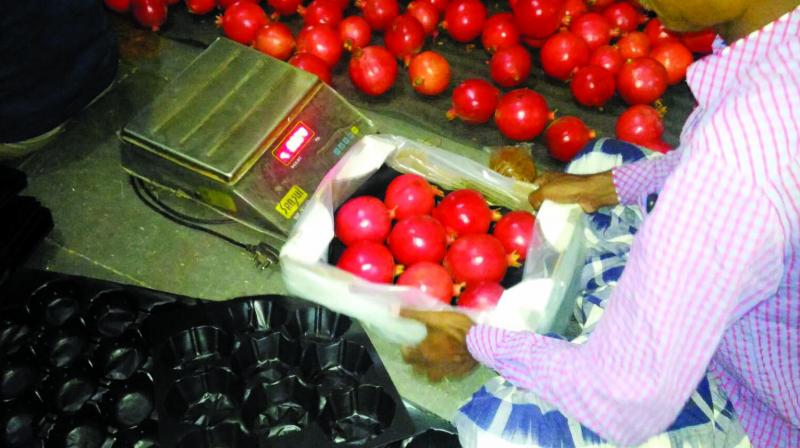 More orchards have come up in Maha-rashtra and now, production has begun even in Gujarat, Andhra and Karnataka.

Nashik: Pomegranate prices have dropped to Rs15 per kg as orchards are holding distress sales, with prices of all fruits having dropped due to bumper harvests and overproduction. The pomegranate production this year has increased by nearly 200,000 to 250,000 tonne to touch a total of 18,00,000 tonne, according to Prabhakar Chandane, president of the Pomegranate Growers Association of India.

Mr Chandane told The Asian Age on Wednesday that, there were many reasons for the fall in prices. The first being an increase in production because more orchards had come up in Maharashtra and now, production had begun even in Gujarat, Andhra Pradesh and Karnataka.

“In Karnataka, the trend is growing and more orchards are coming up. In short, the area under cultivation is increasing by 15 to 20 per cent annually.

Presently, Maharashtra leads in pomegranate cultivation with approximately 175,000 hectare and other states totalling 30,000 to 40,000 hectare. Solapur is the largest producer followed by Nashik and Sangli,” he said.

Outlining the second reason, Mr Chandane said that inclement weather, including unseasonal rain, had caused spoilage of some fruits though there were fewer reports of oily stains on the rind. “The third reason is that there is a bumper harvest of other fruits. Grape prices are down to Rs 12 per kg. Oranges too are in abundant supply and are flooding the markets. Now, according to reports, there is a heavy harvest of mangoes and low prices of pomegranates are likely to continue this month,” he said.

Mr Chandane said that the fourth reason was less export demand. The European markets were saturated with heavy arrival of pomegranate and grapes from Peru, Chile and South Africa, effectively stopping Indian exports to European markets.

Exporter Sheetal Chandane of Sangola Agro Solapur said that about 100 containers of pomegranate had been exported to Europe from December 2016 to March 2017. “Now, some exports are continuing to Dubai and Bangladesh,” he said.