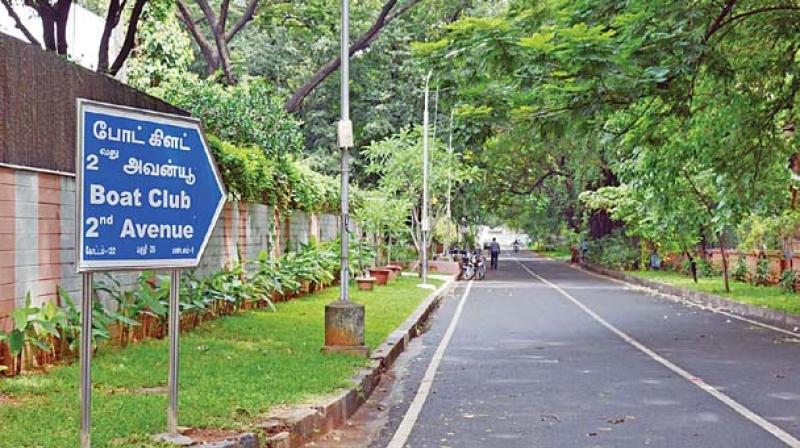 Chennai: Residents of Chennai’s upscale locality, the Boat Club area, have earned the ire of people by making a request to the police to bar outsiders from entering their area for walking and jogging. The letter was referred to the Chennai Corporation which turned it down.

But since the letter became public knowledge, it has given occasion to public spirited citizens to dig into the past and come up with some uncomfortable truths for the residents of this superleafy locality.

Reacting to the letter addressed to the Chennai Police Commissioner, asking for installation of drop gates at the entrance to prevent outsiders from entering the area, former bureaucrat, M G Devasahayam, a chief secretary of Haryana, said, “I am astonished to learn about the demand made by the elite super-posh Boat Club area RWA to convert the place into a 'high-gated colony.'

‘In this context I would like to state that the entire Boat Club area of 105 acres is property bequeathed by Sir John DeMonte to the Catholic Church by a Last Will and Testament executed on 19 July, 1820. As per the Will the property was primarily meant for "poor orphans, widows and distressed families who may be objects of charity and most deserving and also to contribute for Charity Schools" (Clause 31) and "none of these properties can be sold" (clause 27),’ Devasahayam said.

He said that from 1947 onwards big businessmen and industrialists, using their undue influence, had grabbed about 90 acres of the land, including about 15 acres for the super-elite Madras Club and added that only about 12 acres called 'Benz Garden' was retrieved after a long legal fight in 2018-19.

Sitting in grabbed land meant for the poor and enjoying all luxuries, Boat Club RWA has no right to seal the property and prevent ordinary people from accessing this 'breathing space,' Devasahayam said in a statement.

Other Chennai residents took to social media to express their anger against the letter written by Boat Club RWA president Ravi Appasamy. One of them even asked his friends in the area – he had many, he said – to sail through the dirty water of the Adyar River to reach the airport.