Twelve labourers, including five women, were killed and 10 others were injured after a portion of the godown collapsed 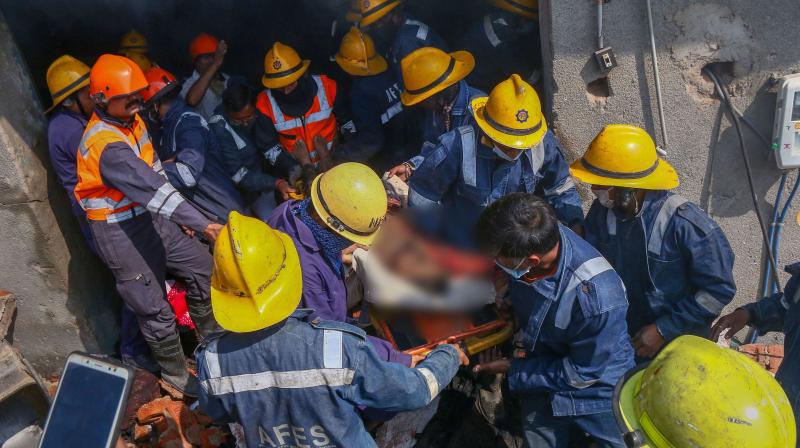 Fire fighters in rescue efforts at the site on Wednesday. (PTI)

Ahmedabad: A day after 12 labourers died when a part of a godown here collapsed following an explosion, the Ahmedabad police on Thursday summoned the godown owner and his tenant who had kept chemical drums there which caused the blast.

A police team along with forensic experts also went to the spot in the morning to collect samples.

Deputy Commissioner of Police A M Muniya said an FIR will be registered after a thorough probe into the incident.

Twelve labourers, including five women, were killed and 10 others were injured after a portion of the godown located on Pirana-Piplaj road on the city's outskirts collapsed on Wednesday morning following a powerful explosion.

Primary investigation revealed that one Buta Bharwad owned this premises having several godowns separated with walls. He gave these godowns on rent to several parties, the police official said.

A small portion of the godown was given on rent to one Hetal Sutariya, owner of chemical trading firm Sahil Enterprise, he said.

"Sutariya had stored various hazardous chemicals, including hydrogen peroxide, in his rented godown. It is suspected that the explosion occurred when some mixing process was going on," the official said.

The explosion destroyed three to four adjoining godowns where labourers were packing textiles and garments, the police official said.

"We have initiated a detailed probe into the incident and started preliminary questioning of Sutariya and Bharwad. The police will lodge an FIR after completion of the investigation," he said.

Meanwhile, a team of the city's Narol police, who have started questioning Bharwad and Sutariya, reached the spot on Thursday morning with forensic experts for collecting samples, police inspector S A Gohil said.

After the incident, the Gujarat government on Wednesday announced an ex-gratia compensation of Rs 4 lakh to the kin of each deceased.

However, family members of the victims are not satisfied with the announcement and have decided not to claim the bodies, currently kept at the civic-run VS Hospital here.

"I lost my son in this explosion. He wanted to financially help the family. What will do with Rs 4 lakh? The government must give Rs 20 lakh as compensation and book those responsible for the tragedy," a relative of one of the victims told reporters.