Venture out for first time after week’s stay at resort on outskirts of Bengaluru. 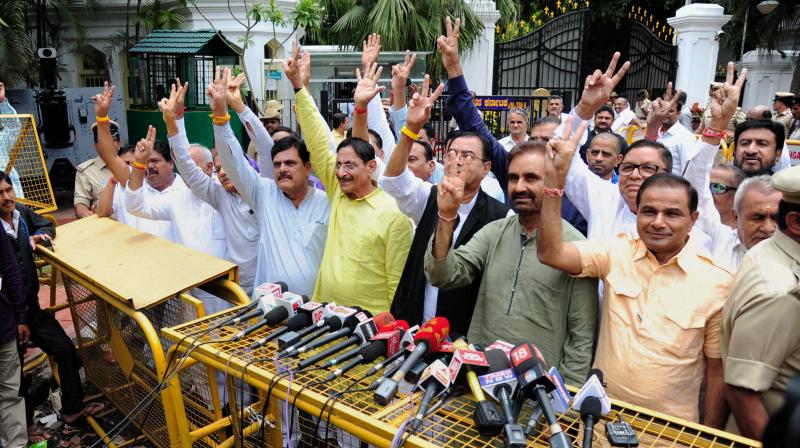 Gujarat Congress MLA's comes out of Rajbhavan after meeting with Governor in Bengaluru. (Photo: PTI)

Bengaluru: Venturing out for the first time after a week’s stay at a plush resort on the outskirts of Bengaluru, the 42 Gujarat MLAs put up a show of unity as they met Karnataka Governor Vajubhai Vala and visited the state secretariat here on Saturday ahead of the Rajya Sabha polls, which all-powerful Congress leader Ahmed Patel is contesting.

Gujrat MLAs raised slogans, “Hum Sab Ek Hain, Hum Sab DKS Ke Saath Hain (We are united... We are with DKS), as soon as they saw Karnataka energy minister D.K. Shivakumar in front of the Mahatma Gandhi statue at Vidhana Soudha. They had gathered to protest against the stone throwing incident targeting AICC vice-president Rahul Gandhi in Gujarat on Friday. Sitting in front of the Mahatma statue, they chanted “Raghupati Raghav Raja Ram”.

After meeting Mr Vala, who also hails from Gujarat, Gujarat MLA and AICC spokesperson Shaktisinh Gohil said that the BJP is spreading canards that party legislators were being held captive by Mr Ahmed Patel. “When we rejected the offer of `15 crore made by the BJP to break us away from the party, we proved that we stood to defend democracy. We are here to expose BJP’s machinations,” he said.

Playing the victim card, he said that the BJP is using the CBI and Enforcement Directorate (ED) to target Congress MLAs. Training his guns on BJP leaders in Gujarat, he said, “If a national leader like Mr Rahul Gandhi is targeted in Gujarat, one can only imagine what would have happened to us if we had stayed back.”

Dismissing media reports and BJP’s accusations that Congress MLAs were having fun at the Bengaluru resort, while people in their constituencies in Gujarat were suffering because of floods, Mr Gohil said, “If we wanted to have a good time, we would have accepted the Rs 15 crore from the BJP and stayed at some fancy resort.”

On joining Mr Shivakumar near the Mahatma statue, Mr Gohil said, “We have been subjected to threats and pressures, but we will not succumb. The BJP wants to spread an atmosphere of fear. A politician and businessman (Mr Shivakuamr) takes care of us and he is subjected to three days of raids and questioning. This is unheard of.”

He said that the raids were not as innocent as is being claimed.

“If they were only interested in questioning Mr Shivakumar, then why did they come to the resort and search? They could have asked him to step out and he could have been taken to his residence,” he said.

“The way IT sleuths descended on the resort and searched the rooms was only to scare us. But they did not succeed,” he said.

The Gujarat MLAs were joined by embattled Mr Shivakumar, who had been sequestered in his house for the past three days by Income Tax officials who concluded the raids on Saturday morning.

After the IT officials left his residence, Mr Shivakumar visited a temple and met a seer before proceeding to the Raj Bhavan to join the Gujarat legislators. Mr Shivakumar refused to speak to the media about the raids.