The indefinite bandh was called by the hill parties, including the Gorkha Janmukti Morcha (GJM), demanding a separate state of Gorkhaland. 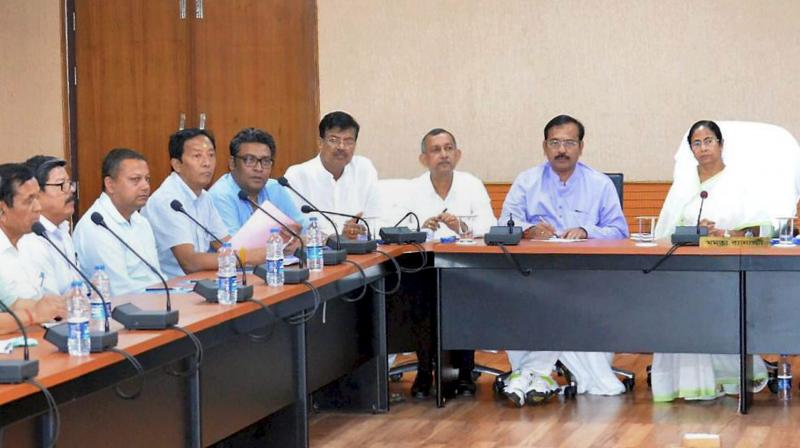 Mamata Banerjee meets with the members of GJM, JAP, GNLF and other Gorkha leaders at Uttarkanya near Siliguri on Tuesday. (Photo: PTI)

Siliguri: West Bengal chief minister Mamata Banerjee on Tuesday urged the Gorkhaland agitators to call off their indefinite shutdown in the Darjeeling hills and help restore normalcy in the region. She also described today’s second round of dialogue with the hill parties as “positive and constructive”.

“Today’s meeting was very positive and constructive. I believe that in a democracy, everybody can speak their minds and put forward their demands,” Banerjee said after the meeting, which was held at the mini secretariat, near here.

The indefinite bandh was called by the hill parties, including the Gorkha Janmukti Morcha (GJM), demanding a separate state of Gorkhaland.

Asserting that she wanted a “permanent” solution in the hills, the chief minister said the discussion to resolve the ongoing impasse there would continue and the next round of dialogue would be held on October 16.

“If the people of Darjeeling face any problem, it can be discussed, because discussion is the only way to sort out issues. “We will stay together and solve the problems. There is no question of any misunderstanding among us,” she added.

Stating that her government wanted peace and normalcy to return in Darjeeling, the Trinamool Congress (TMC) supremo said the people of the hills had faced a lot of difficulties in the last few months. She said Darjeeling was a part and parcel of West Bengal and added that the hill people should be able to enjoy the upcoming festive season.

Requesting the agitators to withdraw the bandh in the hills, which entered its 90th day today, Banerjee also promised compensation to those who had lost their lives due to the agitation. She also said a high-level inquiry would be carried out into the alleged police firing in Darjeeling.